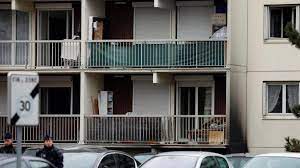 Ten people, including five children, have been killed in a fire in an apartment building near Lyon, France, the local government says.

Officials released a statement saying a "sizeable fire" broke out in a seven-storey block of flats in the suburb of Vaulx-en-Velin.

Four people are in a critical condition and 15 others reported minor injuries, including two firefighters.

The fire is now out and prosecutors are investigating its cause.

The flames appear to have started on the ground floor before spreading upwards.

"I was awakened by the screams... we wanted to help people but the smoke was too heavy. I saw a dead woman... it's dramatic," a local resident told Le Progres de Lyon newspaper.

Another resident told the AFP news agency that his friends had caught a 10-year-old boy who was thrown to safety from an upper-floor window by his mother.

Interior Minister Gerard Darmanin said the children who died were all aged between three and 15.

He praised the firefighters for taking considerable risks by "climbing the building from the outside... saving children and babies up to the seventh floor". Without their "heroism" the death toll would have been much higher, he said.

The block of flats where the fire broke out is part of a housing project in the Lyon suburbs. It underwent emergency repairs in 2019 and was described as "rundown" by Lyon city authorities.

Mr Darmanin said the area was a known drug-dealing spot.

The neighbourhood has had a poor reputation for problems of urban decay and crime, but is undergoing a multi-million euro renovation.