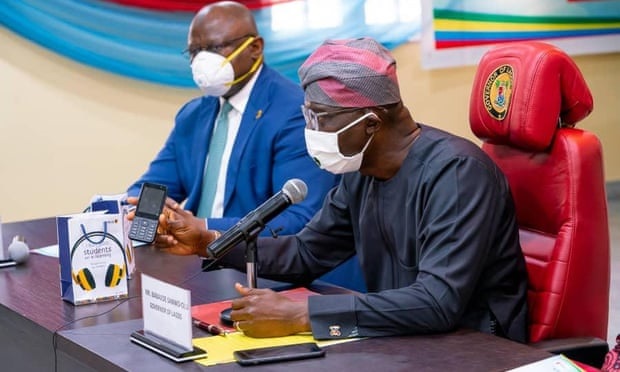 Adesola Adeduntan, left, CEO of First Bank of Nigeria, which part-funded the mobile phones, with the governor of Lagos, Babajide Sanwo-Olu.

Like millions of other children in the sprawling Nigerian city of Lagos, 15-year-old Sharifa Umar switched from classroom learning to lessons over radio, TV, and the Internet when schools were closed in March because of the coronavirus outbreak.

Programmes set up by the city authorities for public schools have aired on television and radio, following statewide timetables.

Individual schools have made online classes available. But for disadvantaged students, access to learning throughout the pandemic has been a challenge.

“The classes were fine; the problem was electricity and data,” Umar said. The erratic power supply to her home on Lagos Island sometimes meant she went days without a lesson. Online classes were inaccessible in part because data was too expensive.

For the past 10 days, she has been using a freely distributed smartphone loaded with data and an app containing the curriculum and video, audio and chat-based classes.

“I still miss school and being in the class but it [the phone] makes a major difference – it is effective and gives me stability,” she said.

About 20,000 children have been given a phone containing an app called Roducate. Local authorities plan to roll out the scheme to 300,000 children in the coming weeks.

According to government projections, the coronavirus pandemic will present challenges to full school reopenings for at least a year, so

“It’s quite clear we are not going to go back to how things were,” said Folasade Adefisayo, the city’s commissioner for education. “We will have to manage this virus for a while, and we’ve found e-learning to be efficient and interesting. The children love the app, and so far we see it as being a part of how they can learn going forward.”

Exams will still be held in schools, she said, but officials will conduct studies on the effectiveness of digital learning on results.

Lockdown measures are slowly easing in Lagos, which has had 8,800 of Nigeria’s 21,000 confirmed cases. Yet new cases are accelerating. Education officials project that even after the outbreak subsides, it will be a challenge to fully reopen schools.

“Before now we haven’t invested sufficiently in education technology but this has forced us,” Adefisayo said. “When we open schools, we’re imagining a reality where we only open them for a certain number of days a week because of social distancing.”

Since the pandemic began, radio-based learning has been the most effective medium, especially in rural areas where television and internet networks are weak, according to the Lagos education ministry. Thousands of free radio devices will be distributed to students from next week.

Smartphone use and internet access have risen rapidly in recent years in Nigeria, yet usage skews towards wealthier people and data are among the most expensive in Africa.

“The issue has been the demography of children in public schools: they don’t have access to devices nor can they afford data,” the commissioner said.

Teachers involved in the trial have broadly embraced it, according to Joseph Odusanya, a chemistry school teacher. “It doesn’t replace the school but it’s a major help,” he said.

“Now with these phones, the children are online constantly. We can interact, I schedule our classes. We can discuss, hold video classes, sometimes I’ll send voice notes and chat. The flexibility helps and I can monitor their progress very well.”

Femi Awosika, Roducate’s founder, said the app was originally designed to enhance in-school learning. “There has to be an interaction between students and teachers because we learn that way, but we also think that we can complement schools and limit their boundaries. There are different ways that learning can evolve.”

The government has lauded the initiative yet also concedes that the number of children who will benefit from the service is low.

Only one in 10 Lagos schools, numbering about 1,700, are publicly funded. The rest are private institutions, half of which have been founded in the last nine years, according to a study by Education International.

Parents often end up paying associated costs to send their children to public schools, and in any case, places are scarce and government funding is low. Low-cost private schools have proliferated as a result, in many cases providing lower standards of education.

“Ideally we would have liked to have given the phone out to low-cost private schools,” Adefisayo said. “But we’re hoping if we can get investments we can start doing that.”

As schools have remained closed, education inequalities in Lagos have widened, Adefisayo said. “Inequality continues to bother us. We knew that the pandemic would further exacerbate the learning gap which the state is committed to address.”