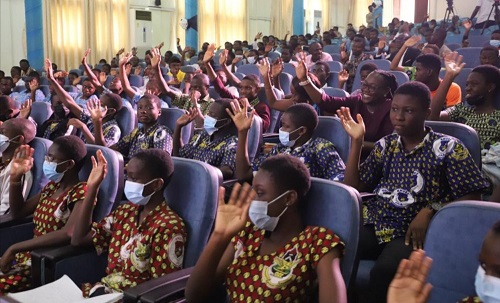 Some of the students at the launch of the quiz. Follow @Graphicgh

The third edition of the Kwame Nkrumah University of Science and Technology (KNUST) Junior Science and Maths (JSM) Quiz has been launched in Kumasi.

More than 200 basic schools from four regions – Ashanti, Greater Accra, Northern and Western - are participating in this year’s competition.

The event is being organised in partnership with ERIDEC Ghana Limited and supported by the Ghana Education Service (GES).

The university’s vision is to roll out the competition across the entire country and also provide very attractive packages, not only for the winners but the competing schools, particularly the less-privileged ones.

The regional preliminary contests will be held in November, followed by the national contest in December this year.

In a speech read on her behalf at the launch, the Vice-Chancellor of the University, Professor Mrs Rita Akosua Dickson, explained that the quiz was the brainchild of two students of the university, Messrs Eric Kwabena Appiah and Derick Kyei Boakye.

She said the students approached the then Provost of the College of Science, Prof. (Mrs) Ibok Oduro, and discussed the possibility of KNUST organising a Science, Mathematics and Technology competition among basic schools in the country.

She added that the management of KNUST noted that the vision was in line with the strategic objectives under Theme 7 of the KNUST Corporate Strategic Plan (2016-2025) and decided to adopt the quiz to enable them to reach out to young learners of Ghana.

Prof. Dickson said promoting quality education for the achievement of the UN’s Sustainable Development Goal (SDG) Four remained a priority of the university.

The Provost of the College of Science, Prof. Leonard Amekudzi, said training students to develop the art of problem-solving was dependent on science and mathematics education.

“The college will do everything to meet the objectives for which the JSM Quiz was instituted,” he stated.

The Board Chairman for the JSM Programme, Prof. Kwasi Preko, described the two previous editions of the competition as successful and said he was hopeful that the competition would reach out to all students in Ghana in the near future.