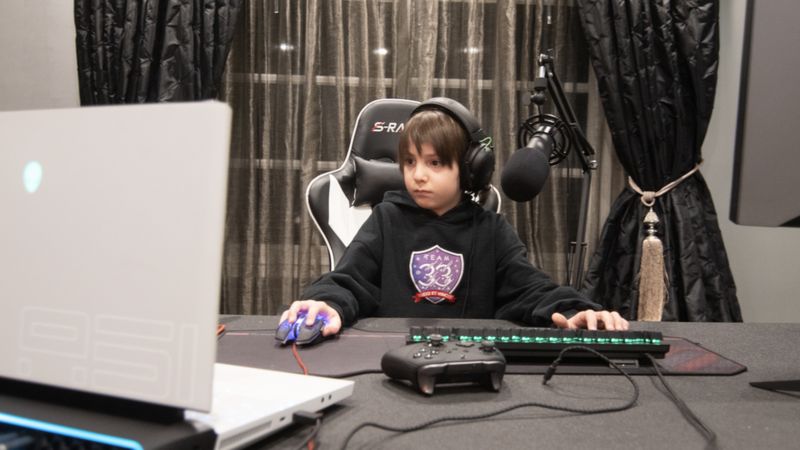 The highlight of most children's eighth birthday is blowing out the candles on their cake.

However, for Joseph Deen, it was blowing the ink dry on his freshly-signed contract to be a professional gamer.

Joseph is the youngest-ever paid Fortnite player, after signing with Team 33 in December last year.

The Californian esports team invited him to their headquarters to give him a $33,000 (£23,600) signing-on bonus, and high-speed computer system.
Fortnite is a first-person-style shooting and building game played online by hundreds of millions of gamers around the world.

"I felt amazing when I got offered the contract," Joseph told the BBC. "I've thought about being a professional gamer a lot, but no-one took me seriously until Team 33 came along."
Joseph, who's also from California, has been playing Fortnite since he was four years old and was first noticed by the fledgling esports team 18 months ago.

"One of my scouts got in touch and said 'I've got to know this kid called Joseph and he is insanely good'," explained Tyler Gallagher, Team 33's chief executive and co-founder.

"So they started playing one v one matches as much as they could every day. After a while my scout said 'you've got to sign this kid. If we don't, someone else will!'."
According to the esportsearnings.com website, only two of the top 10 highest-earning Fortnite players are over 18.

For fellow American Joseph, who was just getting into the game at the time, it was a moment of inspiration.

"My dream is to be like Bugha and play like him. I look up to him because no-one took him seriously until he won the World Cup and I feel the same, as no-one took me seriously until I was signed by Team 33."
But, according to the world's major age certification bodies, Joseph is too young to play Fortnite.

The game first came out in 2017 and is rated PEGI 12 or ESRB "teen" certification for frequent mild violence.