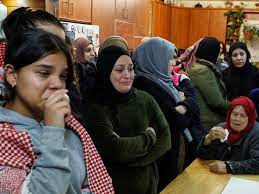 The Israeli army has shot and killed a Palestinian teenager during a raid on the city of Bethlehem in the southern occupied West Bank.

Adam Issam Shaker Ayyad, 15, was killed after he was shot in the chest last Tuesday morning, the Palestinian Ministry of Health said.
The killing took place during an Israeli army raid on the Dheisheh refugee camp that began before dawn and included dozens of armoured vehicles, after which confrontations with young Palestinians broke out. According to local media, Israeli forces arrested several residents during the raid.

The Palestinian foreign ministry described the killing as a “heinous crime of execution” in a statement, and said “Israel’s continued impunity encourages it to commit crimes against our children”.

“It is an extension of the series of extrajudicial killings and a part of Israel’s targeting of Palestinian children in general,” the statement continued.

The Israeli army said its forces had “opened fire at a number of Palestinians who hurled Molotov cocktails at them amid the clashes, adding that suspects were hit,” according to Israeli media.
Ayyad is the third Palestinian to be killed by Israel since the start of the new year, as a result of a continuing Israeli military campaign of intensified raids and killings that has lasted almost a year.

On Monday, Israeli forces killed two men during a raid on the village of Kufr Dan in Jenin in the northern occupied West Bank.

The United Nations said 2022 was the deadliest year for Palestinians in the occupied West Bank in 16 years – since the end of the second Intifada or Palestinian uprising in 2005.

A new Israeli government, said to be the most right wing in the state’s 74-year history, was sworn into office on December 29.
The government, led by Prime Minister Benjamin Netanyahu, includes controversial figures whose presence in positions of control over Palestinians is raising fears of further igniting tensions on the ground in the occupied West Bank and East Jerusalem.
Palestinian Authority Prime Minister Mohammad Shtayyeh said in a statement on Tuesday that the Israeli government bore “full responsibility for all the consequences of its aggression against our cities, towns, villages, and camps, and the accompanying killings, demolitions, and arrests” including that of Ayyad.

Ayyad studied at a UN-funded school in the Dheisheh camp, according to the Palestinian education ministry.
Israeli forces killed at least 171 Palestinians in the West Bank and occupied East Jerusalem in 2022, including more than 30 children. At least 9,000 others have been injured.

Civilians confronting the Israeli army during raids and uninvolved bystanders have been killed, as well as Palestinian fighters in targeted assassinations and during armed clashes.