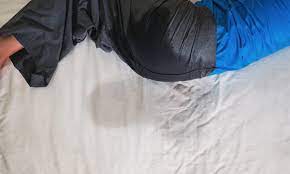 There is hope for children who wet bed Follow @Graphicgh

A Paediatric Nephrologist, Dr Beatrice Nyann, has said there is hope for children who wet their beds so parents should not despair.

In an interview, she said bedwetting was common in children and could be managed by behavioural change.
“There is much hope. Parents should not despair because invariably children grow out of it, especially for those who do not have other health problems or stressors,” she added.

She, therefore, said parents should know they were not alone and desist from beating or punishing children for bedwetting and rather seek help.

Bedwetting
Bedwetting is the passage of urine during sleep in a child who is at least five years. However, Dr Nyann noted that the international body that dealt with issues concerning bedwetting now wanted to use the term “Enuresis” for bedwetting because it (bedwetting) had a derogatory connotation.

She explained that a child who had a problem of bedwetting had at least five years because at that age one would expect that child to be mature enough to be able to control when he or she wanted to pass urine.

That, she said, was different from bedwetting during sleep although they all fell under the same broad category.

Risk factors
Dr Nyann said unlike malaria or typhoid or other diseases that had specific causes, there was no single cause of bedwetting but added that there were a few major risk factors that predisposed children to wet their bed.

She said children “who wet their bed at night generally produce a lot of urine at night.”

Explaining, she said God in His own wisdom made the body such that in the night one produced less urine than during the day.

She stated that there was a mechanism in place for that but for those children who had bedwetting problems that mechanism was not so functional and as a result, they tended to produce a lot of urine in the night.

Furthermore, Dr Nyann said some of those children might have problems with their bladder (an organ in the body where urine is stored before it comes out of the body).

“While some of them have bladders which are hyperactive, which always want to get rid of the urine, others are born with small bladders so they cannot store much urine. Therefore, even a small amount of urine has to come out,” she said.

Moreover, she said some children were born with the normal size of bladder but the bladder was almost always full “because they have what is called reflux – so even as they pass urine, some of the urine goes up again and will fill the bladder again.”

She said even when those children passed urine, they still had a little urine left like a reservoir and that meant that even when the body produced a little more urine the bladder would get full and the child would urinate and that could be at the time when he/she was asleep.

Another interesting thing to note, Dr Nyann said, was that bedwetting was said to run in families.
She said a child may not get this history from his mother or father but a little probing may show that there was a family history of enuresis.

She said for a child who had been dry since, for instance, age three and “suddenly starts wetting again after age five there is the need to investigate to identify its cause.”

This may be from certain environmental stress factors. Some of the questions asked include: Is there something happening in school? Has something changed in the environment? Are the parents going through problems? Are they being abused? Are they going through any psychological trauma?

She emphasised that there were times when parents had issues at home and that may affect the child and he or she may start wetting their bet in the night.

Also, the black race and children who easily get urinary tract infection were risk factors.

Constipation and some diseases such as sickle cell, diabetes or kidney problems also predispose children to wet at night.

Children who are hyperactive or have attention deficit are also at risk of bedwetting.

Treatment
Dr Nyann said treatment included managing the risk factors. For instance, if the child was constipated, that was managed.

Parents have also been asked to monitor the drinking habits of their child to ensure that the child is not taking in too much fluid at least two hours to bedtime, because the more you drink the more urine you pass.

“So if your child is drinking a lot from 5 p.m. to 7 p.m. they will urinate in the night. So we work on that first. Try and look at the drinking habit of your child and make sure your child is not taking much at least two hours to bedtime,” she said.

These include waking the child up intermittently during the night or whenever they sleep to pass urine.

There is also what is called ‘lifting,’ where the parent literally lifts the child and puts him or her on the toilet seat to pass urine.

Bladder training, Dr Nyann said, may also be done. This is where during the day time, the child is made to delay urination a bit when he or she has the urge.

This, she said, trains the bladder to be able to accommodate a little more of urine than usual. However, she said the child should not be made to keep the urine for a long time because that child could wet himself or herself.

Another strategy is ‘the reward system’. Here, the parent looks for something the child likes and ‘rewards’ him or her with more of that when he or she does not wet his or her bed.

Cleanliness training – Dr Nyann said that involved letting the child change the beddings when he or she wet them. That, she said, was not punishment.

Positive reinforcement
Dr Nyann said it was important for parents to desist from negative consequences of bedwetting such as douching, spanking, punishing, comparing them to their siblings, among others, because they make children lose confidence in themselves.

“Already the child has a problem with his or her self-esteem for bedwetting and the last thing we want is to raise children who do not have confidence in themselves,” she added.

She said in behavioural management, positive reinforcement was what was preached and promoted.

For instance, she said a parent should say “I am going to get you this or do that for you if you do not wet your bed this week,” adding that children were motivated by that as opposed to the spanking.

She explained that the alarm system was the gold standard but it took time to work and the parents and the child had to be committed for a minimum of three months.

Here, she said the parent put a special kind of pad in the child’s blanket or bedding or undergarment. “As soon as the child starts urinating and the fluid comes into contact with the pad, the alarm goes off and the child has to quickly wake up and urinate and not complete the urination in bed.”

That strategy, she said, conditioned the mind so that after sometime, the child himself/herself would wake up even without the alarm going off to go and urinate.

Dr Nyann said when all the behavioural management interventions and the alarm system were not giving the desired effect, then some medications may be added by a doctor.