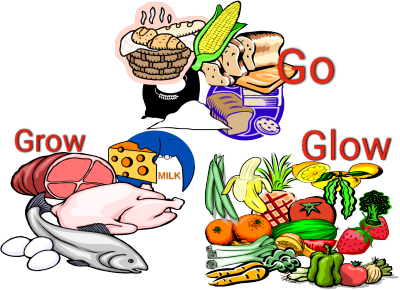 Eat all the foods in the right proportion. Follow @Graphicgh

The Deputy Chief Dietician at the 37 Military Hospital, Mrs Hamdaratu Dauda Wumbei, has said healthy eating is crucial to the overall health and well-being of children.

She explained that though nutritious diets in early childhood had the ability to shape the healthier and happier future of children, many children around the world were not being given adequate nutritious meals and that affected the growth and development of their potential.

She, therefore, emphasised how important it was for children to eat foods that would help them grow, glow and go throughout the day every day.

Grow foods
In an interview with the Junior Graphic in Accra, Mrs Wumbei said the ‘grow’ foods (protein) (which were also known as the body’s building blocks) were vital for the growth and development of children of any age.

She said as children reached adolescence, their need for protein increased since it was a period of rapid growth and development.
“Protein comes in different forms. For instance, dietary protein comes from animal sources, such as meats, fish, poultry and eggs; plant sources include beans, agushie and groundnuts. We also get protein and other key nutrients (calcium) from dairy foods such as milk, yogurt and cheese,” she added.

Mrs Wumbei said many animal proteins were high in saturated fats (bad fat) so it was recommended that leaner cuts of meat and skinless chicken or turkey should be consumed.

“Besides, consuming more fish is highly recommended because it is a good source of Omega-3 fatty acids which are essential for children’s healthy growth, development and their high performance in school,” she said.

Glow foods
‘Glow foods,’ she pointed out, were the vitamins and minerals found in fruits and vegetables and they were important for fighting off illnesses, improving skin and eye health, adding that the glow foods, were like the ‘Body’s Police,’ and a must-have in  daily meals.

“These foods which are low in calories but high in fibre help to maintain regular bowel movements to prevent constipation,” she added.

Mrs Wumbei said further that children should include different coloured fruits and vegetables as part of a meal or a snack, as fruit juice or smoothies to increase the variety of nutrients they would get since different fruits give different nutrients.

Go foods
According to Mrs Wumbei, the “Go foods are great sources of carbohydrates that children use to fuel body movements such as running, jumping, playing and brain power to think for higher performance.”

She said those foods included whole grains and cereals such as millet, rice, maize, spaghetti or pasta and oats, cornflakes and whole wheat bread.

“Further, go foods include foods containing fat and sugar that provide children with fat soluble vitamins. Also, it is better to choose unrefined and low sugar breakfast cereals such as millet porridge, oats, cornflakes and whole wheat bread,” she said.

The dietician noted that foods from all the above groups worked together to supply the energy and nutrients necessary for health and growth and the amount a child needed depended on his or her age, gender, height, weight and physical activity levels.

She added that no one food was more important than the other and that variety was key to good health and higher performance.

Vegetable sources
She said children should be given healthy fats such as those from vegetable sources. These include avocados, groundnut oil, palm oil and spreads, and not large quantities of fats from fries, pastries, crisps and manufactured products because they had little nutritional value and could increase one’s risk of heart disease.

“Sugar does not give children any vitamins or minerals but rather calories which can lead to excess weight gain if eaten regularly. Sugar can also cause tooth decay so children should try to consume low sugar snacks and fruit juices rather than fruit drinks”, she pointed out.

She said children should set a reasonable limit on cake, cookies, ice-cream, desserts and toffees and they should enjoy them in small portions.

“Besides, outdoor games provide great opportunities for learning since they help children to become familiar with their environment because they are playing with other children to develop their social skills and help build their confidence,” she said.

Consequences of unhealthy diet
The dietician said childhood malnutrition has lasting negative socio-economic and health consequences into adulthood, resulting in a vicious cycle of growth failure that could continue for generations.

“Additionally, unhealthy diet during childhood has irreversible effects such as poor mental and physical development and a weakened immune system,” she added.