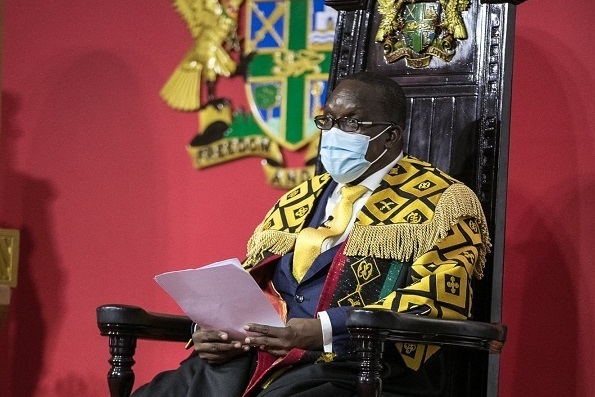 Rt. Hon. Alban Bagbin is the Speaker of the Eighth Parliament of the Fourth Republic
30.5k Shares

Ghana, on Thursday, January 7, 2021, added to its democratic credentials when Parliament for the first time in the Fourth Republic elected a Speaker who is not a member of the ruling government.

Rt Hon. Alban Sumana Kingsford Bagbin, who is the current Speaker of the Eighth Parliament of the Fourth Republic, is a staunch member of the opposition National Democratic Congress (NDC) who once contested the flagbearership position of his party but lost.

During his election as a new Speaker for the Eighth Parliament, he obtained 138 of the votes cast by the 275 Members of Parliament (MPs) to beat the immediate past Speaker, Rt Hon. Prof. Mike Aaron Oquaye, a member of the ruling New Patriotic Party (NPP) government, who secured 136 of the votes cast.

One of the ballot papers was, however, considered spoilt.

Also elected were the First and Second Deputy Speakers which went to Mr Joseph Osei-Owusu, the MP for Bekwai who was also the immediate past Deputy Speaker of Parliament, and Mr Andrew Amoako Asiamah, the independent MP for Fomena.

Rt. Hon. Bagbin is not new to Parliament. A former MP, he was for 28 years the representative of the people of Nadowli-Kaleo Constituency in the Upper West Region. He has also served as both Minority Leader and Majority Leader in  Parliament.

He has rich experience in parliamentary rules and conduct, qualities which many believe make him a suitable person for the position of Speaker.

Another history that was made is that no single political party has majority seats in Parliament.

Information obtained from the Electoral Commission’s website showed that in the recently held presidential and parliamentary elections, the ruling NPP had 137 seats while the opposition NDC also had 137 seats, with one independent MP, resulting in what is termed a hung Parliament.

Rt Hon. Bagbin and the 275 MPs elect of the Eighth Parliament have been sworn in.

The Speaker was sworn into office by the Chief Justice, His Lordship Justice Kwasi Anin Yeboah, after which the former swore into office the 275 MPs elect.

In his speech after he was sworn in, Rt Hon. Bagbin pledged to submit himself to the will of the House, serve the country and discharge his duties as Speaker well.

The inauguration of the Eighth Parliament was followed hours later by the swearing in of the Fifth President of the Fourth Republic, Nana Addo Dankwa Akufo-Addo, and his Vice, Dr Mahamudu Bawumia.

The several protests, fighting and snatching of ballot papers by an MP marred the beauty of the ceremony which many have since taken to social media to condemn.

President Akufo-Addo in his inaugural address thanked God and Ghanaians for renewing his mandate in the recently held elections.

For the sake of our young readers, I will explain some of the terms used in this article and also the implications for the history made with our current hung Parliament and the election of a Speaker who is not a member of the ruling government.

Why Eighth Parliament and Fifth President of The Fourth Republic?

For you to understand this, you need to know what the republic used in this contest means. As we explained to you in one of our editions in January 2017, anytime our country is introduced to a new constitution, we say it has entered into a new republic.

There has not been any other constitution since 1992 so currently this country is under the dispensation of the Fourth Republic.

Since the 1992 Constitution was introduced, the Fourth Republic has had five democratically elected Presidents and President Nana Akufo-Addo is the fifth one.

The First President of the Fourth Republic was Former President Jerry John Rawlings who was elected into office from 1992 to 2000.

Former President John Dramani Mahama, who ruled from 2013 to 2016, is the fourth President of the Fourth Republic.

It is important to know that in the calculation of the presidents under the republics, it doesn’t matter the number of terms you serve, it is still considered as one.

That is why even though some of the presidents had two terms in office, it was calculated as one.

This, however, is different when it comes to the calculation of the parliamentary one.

For Parliament, because after every four years new MPs join Parliament while some of the old MPs exit, each term counts.

From 1992 up till 2021, there have been eight Parliaments and that is why we have Eighth Parliament of the Fourth Republic.

I said earlier in my write up that Ghana now has a hung Parliament. We know that during our last election held in December 2020, a total of 275 Members were elected to Parliament, with one per constituency.

Unfortunately, with the current Eighth Parliament, no single political party has majority seats.

The NPP and NDC have equal number of seats, with one independent MP.

This is what is called a hung Parliament.

Many political pundits have come out to say that having a hung Parliament will put the government on its toes because it does not have a simple majority and, therefore, will not have its way in Parliament, by way of pushing for certain bills to be passed.