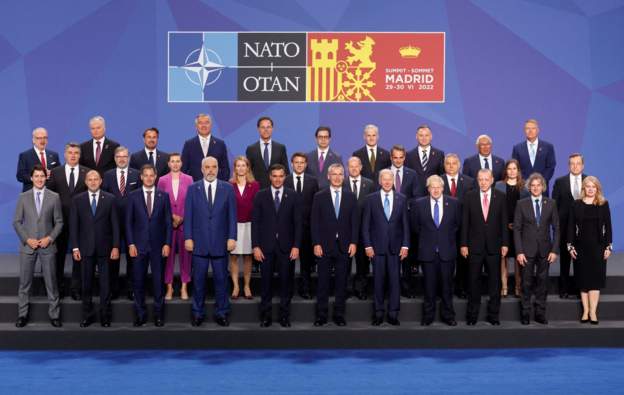 In that meeting also two countries; Finland and Sweden will receive formal invitations to join the alliance after Turkey dropped its opposition.

British Prime Minister, Boris Johnson is expected to call on member states to increase their military spending, at the meeting but he is facing pressure at home to further boost the UK's defence budget.

Meanwhile, at least three people have died in a Russian missile strike on a residential building in the southern city of Mykolaiv

Furthermore, the Ukraine's President, Volodymyr Zelenskyy has called on the UN to recognise Russia as a terrorist state after Monday's strike on a shopping centre in Kremenchuk which killed 20 people.

In a related develpment, Russia views plans by Sweden and Finland to join Nato "negatively", according to comments from the country's Deputy Foreign Minister reported by Interfax.

Sergei Ryabkov is also quoted by Russian state news agency RIA as saying that the expansion of Nato is "destabilising" and does not add to the security of members of the alliance.

Sweden and Finland will be formally invited to join Nato, according to Secretary-General Jens Stoltenberg, after Turkey dropped its objections.

He said the expansion of Nato was "the opposite" of what President Vladimir Putin hoped for and instead showed that the alliance's "door is open".