Covid: What will the pandemic look like in North Korea? 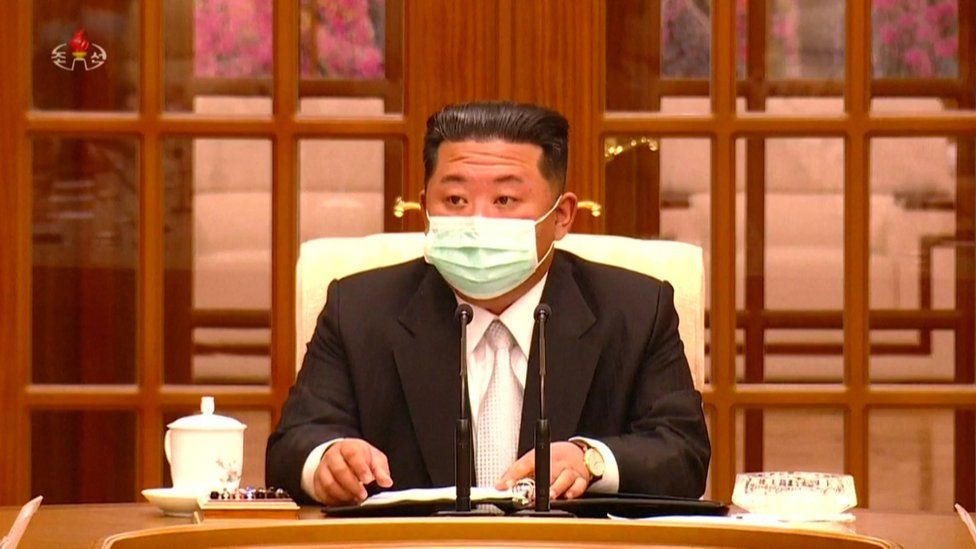 For almost two-and-a-half years, North Korea has stuck to its claim it has seen no cases of Covid-19. Not any more.

This week, the country confirmed its first infections. The highly reclusive nation had responded to the pandemic by closing its borders, although few believed it had really managed to escape the virus.

Now, the authorities are not only acknowledging the virus' presence but declaring an all-out battle to control it, with North Korean leader Kim Jong-un calling it the "greatest turmoil" to fall on the nation since its founding. A national lockdown is in place.

Hardly anywhere in the world is untouched by Covid. Cases have been recorded at the base camp of Everest and in Antarctica. Individual nations' responses to the pandemic have varied in severity, but have broadly meant vaccine programmes, testing, social distancing and limits on travel.

How the pandemic in North Korea will unfold is likely to remain murky, given the nation's secrecy.

There are fears Covid could be disastrous there. "I'm really concerned about how many people are going to die," said one of the experts who spoke to the BBC.
Frail healthcare system

The overwhelming challenge faced by North Korea is that the country lacks the most effective weapons against Covid.

The population is unvaccinated, and, assuming that cases were at the very least low until now, largely unexposed to the virus. With no immunity, there are fears of large numbers of deaths and of serious illness.

Testing is also very limited. The World Health Organization says North Korea has carried out about 64,000 tests since the start of the pandemic. In South Korea, which made test and trace a central part of its Covid strategy, the figure stands at about 172 million.

Hard data has been an important tool for many governments, and even that in North Korea's case is ambiguous. On Saturday state media reported half a million cases of unexplained fever, likely a reflection of difficulties identifying Covid cases, and a hint at the scale of the outbreak North Korea is facing.
Kim Jong-un wearing a face mask at a government meetingImage source, KCTV / AFP
Image caption,
Kim Jong-un has not been seen wearing a face mask on television since the pandemic began

And, even in wealthy countries, Covid sparked concerns that healthcare systems could be overwhelmed. North Korea is especially at risk.

"The healthcare system has been and is quite dire," said Jieun Baek, the founder of Lumen, an NGO which monitors North Korea.

"It's a very decrepit system. Aside from two million people living in Pyongyang, the majority of the country has access to very poor quality healthcare."

Defectors speak of beer bottles being used to hold IV fluid, or of needles reused until they rust.

As for things like masks, or sanitiser, "we can only imagine how limited those are" said Ms Baek.
Lockdowns, but will they work?

In the absence of a mass vaccination campaign, North Korea is set to turn to the sole major defence against Covid: lockdowns. "Brute force clampdowns on people's movement will become even stricter," Ms Baek predicted.

Mr Kim has said North Korea should "actively learn" from how China responded to the pandemic.

While most countries are now living with the virus, China has stuck to its zero-Covid policy of trying to eradicate the disease. Major cities, including financial hub Shanghai, remain under stay-at-home orders.

This has come at a price, with Shanghai residents complaining about their conditions, lack of food and poor medical care. Public criticism of government policies is rare in China.

Should North Korea impose similar restrictions, experts warn the situation with supplies could be much worse than, say, Shanghai's.

Even then, the measure might not be enough to halt the spread of the highly contagious Omicron strain.

"Look how difficult it is in Shanghai, for them to stop Omicron - and that's throwing absolutely everything they can think of at the epidemic, at the outbreak," said Professor Ben Cowling, an epidemiologist from the University of Hong Kong.
Farm workers in North Korean rice fieldsImage source, AFP
Image caption,
There are concerns Covid could worsen an already dire food situation

"In North Korea I think it's going to be very tough to stop this. I'd be very, very worried at this point."

North Korea also has longstanding problems with food production. It suffered a brutal famine during the 1990s and today, the World Food Programme estimates that 11m of the country's 25m are undernourished.

Its farming methods are outdated, making successful harvests difficult. If agricultural workers are unable to tend the fields, greater trouble lies ahead.
Help is available, if North Korea will accept it

Both China and the WHO have previously offered help to North Korea, in the form of vaccines, but the authorities have refused them.

Mr Kim's mention of China could signal a change of heart.

"I suspect that they desperately want China's help, and China will offer as much as it possibly can," says Owen Miller, a lecturer in Korean studies at London's SOAS university. China's priority, he says, is keeping North Korea stable.

But, he adds, North Korea might not want other outside help, which would mean a return to the 1990s when large numbers of aid agencies were present. It would be "very destabilising for the rulers to deal with this monitoring on their own territory", he said.

For the moment, there is no sign that even if North Korea is in the middle of a health crisis, it will change it approach to global relations.

The US and South Korea have warned that the North could soon conduct another nuclear test - something North Korea watchers say could be a means of distracting the population. Mr Kim could also use his response to Covid as a way of rallying North Koreans and justifying further hardships.

All this would mean further suffering and isolation.

"They really only have one option. They've got to find a way to bring in vaccines and to rapidly vaccinate the population," said Peter Hotez, a vaccine expert at the US National School of Tropical Medicine at Baylor College of Medicine.

"The world is willing to ready to help North Korea, but they have to be willing to invite that help."
More on this story