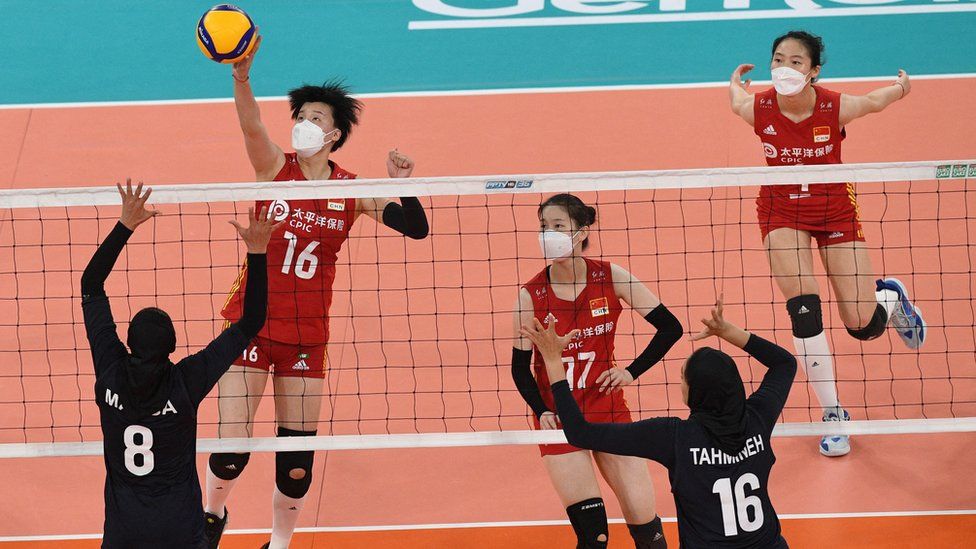 The Chinese team wore masks during the first set of an Asian Cup match
30.5k Shares

Many netizens expressed their anger, suggesting that the health of players was being sacrificed for the sake of the country's zero-Covid strategy.

The players later took their masks off for the second set and went on to win.

China's Volleyball Association later apologised, saying the decision was made was due to a "lack of experience".

But many remained critical, with one saying it was an example of officials taking China's mask mandate "too far".

"Our leaders are... taking things too far - it's as simple as that," one user wrote.

The event took place on Thursday at the Asian Cup in the Philippines and saw the Chinese team go up against Iran.

Photos from the match, showing the athletes with their masks on, quickly circulated on social media - triggering an uncommon outpouring of criticism online, with more than 16 million views on the topic on Weibo, China's largest social media platform.

One Weibo comment wrote: "Is health or performance more important? We need to take some responsibility towards our athletes."

Another said: "How long will this so-called epidemic prevention farce continue? Do we want to become the butt of all other countries' jokes?"

The fury online prompted the Chinese Volleyball Association to respond on Thursday with a public apology.

In a statement on Weibo, it explained that team organisers prior to the game had learnt of Covid- infected players in other teams and said some symptoms had been reported among Chinese team members.

To prevent the spread, they required their players wear masks upon entering the venue. But because they were unclear on whether players had to wear masks on court, the team kept them on during the first half, they said.

After losing the first set, most players later took their masks off during half-time - and later won 3-1 against Iran.

"After realising that playing with a mask is not good for the health of the players, the team reminded us in time [so] that our players took off the masks and finished the next game," the organisers said.

The statement also made reference to the new "difficulties" faced by Chinese teams competing abroad - whose members largely have not previously been exposed to Covid.

China continues to employ some of the strictest Covid restrictions in the world including an indoor and outdoor mask mandate, severe, sudden lockdowns and closed borders.

However, this is not the first time athletes have worn masks during sports matches.

Earlier this year, an ice hockey match between Canada and the Russian Olympic Committee saw both sides wear masks, due to "safety and security concerns" over pending test results.

They later removed their masks after it was reported that their tests had come back negative.