Yofi Grant - His Privileged background did not make him swollen-headed 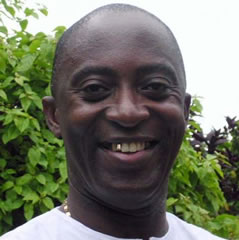 More often than not, children who are born into privileged homes get  swollen headed and are never serious  with anything. They  tend to lead frivolous lives that are not worthy of the family name they bear.

But  our personality for this week is an exception. While growing up, he  made a conscious effort  not  to tarnish the  family  name he bears.

“While at Achimota School, I was not interested in running away to town, smoking and picking girlfriends as other students did because I was always reminded to hold the family name in high esteem. So I was careful in whatever I did,” Mr Yoofi Grant, a Director of the Databank Group, an investment banking firm, said.

Mr Grant has a solid career in banking and finance, including, but not limited to, treasury, financial restructuring and management, divestiture and privatisation, as well as equity, debt and project finance.

He was born to a career diplomat father, Mr H.A.H.S. Grant, and a mother who was in nursing. He spent part of his early childhood in Europe while his father served as Ghana’s Ambassador. His early childhood was dotted with travel and exposure in different countries. Aside that, he attended some of the privileged schools of his time.

While enjoying a glass of chilled coke at the cosy lounge of Frankies Restaurant, the investment banker told this reporter that  he spent his early life in Switzerland where he also first started school. On his first day in school, according to him, he experienced mixed feelings because there weren’t many Black people in the school.  He recalled that though his father had a car and a chauffeur who could drive him and his siblings to school,  they walked to school because his father wanted them to be  like the  other students.

“We used to walk through a farm to school and, as a child, I didn’t like the smell of cow dung from that farm. I was also terrified of the cows.  My sisters,  who were aware of that, would frighten me that the cows were coming after us and I would take to my heels,” he recalled.

Throwing more light on his experiences as a child in a foreign country, Yoofi said at that time there weren’t many Blacks in Switzerland. Therefore, anytime the family went out, “it was a bit of a sight, as people kept staring at them, wondering who the “Black man (in reference to his father) being driven by a White man is”.

As a child, Yoofi felt uncomfortable with those stares but he did not ask his parents about them, even though he did not  understand why it was so. But he thought they must have been special.

“The issue of racism didn’t occur to me because I did not understand it at the time,” he said.

Yoofi’s family moved to Liberia following his father’s reassignment to that country. He said before the  war, Liberia  was a buoyant and flamboyant country.

He said he stayed with his family directly opposite one of the nice beaches in Liberia and that made him to appreciate nature and pristine environment.

But his love for his new environment was  short-lived because Young Yoofi was brought to Ghana to continue his education as a boarder at the Kwame Nkrumah University of Science and Technology (KNUST) Primary School, Kumasi  because his parents considered the Liberian standard of education not to be too good.

The KNUST Primary, according to Mr Grant, at that time was attended by children from mostly privileged homes.

“And I remember the first time I went to the school, it was by train from Accra to Kumasi. The school, for me, was exciting because I discovered new friends and things, including how to read and learn the times table. One of my longest friends from there is the pathologist, Dr Robert Kumodji, the son of the famous Dr Kumordji of blessed memory,” he recalled.

Another exciting experience for Young Yoofi was the fact that during open days for the KNUST, he got the chance to visit the laboratories of the university. One difficulty that he faced when he started KNUST Primary was  that his English was very bad and so he had to repeat a class. That was because in Switzerland where  he had grown up it was French and German that were spoken. As a result of that difficulty, during classes his teachers had to ask his sister to explain things to him.

He recalled with amusement how his  dormitory mates told him frightening  stories about dwarfs and ghosts. One nightmarish but hilarious experience Young Yoofi had while at the school was when he had measles.

He recounted how he woke up one day to realise that he was on a gurney under a sheet without any clothes on in a room which turned out to be a mortuary. He explained that apparently somebody had mistaken him for dead and sent him to the mortuary.

He said when his circumstances dawned on him, he screamed so loud and the attendants and the nurses joined him in the chorus of screams. Thankfully, he was taken out and he is still with us today.

Young Yoofi continued his education at Achimota Primary and later Achimota School. He said though he was a diplomat’s son, he was disciplined,  just like any other child. He did chores such as scrubbing, weeding and sweeping.

According to him, although he sometimes sustained wounds and blisters on his hands while doing those chores, it was exciting for him, saying those chores  taught him  to appreciate different sides of life, as well as the fact that cleanliness and order were invaluable lessons which had helped his life today.

It was also at Achimota that he learnt to play many competitive games, including hockey, cricket and volleyball, and discovered his passion for sports. But perhaps more enduring of his days at Achimota were the lifetime friends he made, and some, such as Robert Kumodji, were all the way from the KNUST Primary School through to Achimota School. Others were Ken Ofori-Atta, Frank and Keli Gadzekpo.

Yoofi passed all his examinations in secondary school, even though he had very broad interests. He does not recollect being a very studious student  but he had a passion for reading everything, except the science subjects he offered. He wished he had taken school much more seriously because education is an investment for which the value never declines.

After successfully passing his ‘A’ Level examinations, he gained admission to the University of Ghana in 1979 where his curiosity led him to study  Psychology. On completion, he did his National Service at the Accra Academy and went back to do his postgraduate studies (MPhil) in Organisational and Management Behaviour.

Even though he said his dream as a child was to become an architect, he had not regretted becoming an investment banker.