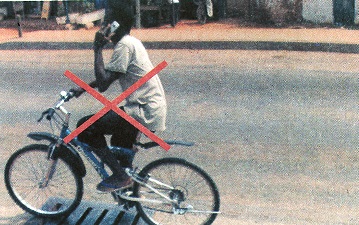 Young children do not have the skills needed to cross the road safely so adults should assist them to prevent them from being knocked down by vehicles, the Motor Traffic and Transport Department (MTTD) of the Ghana Police Service (GPS) has stated.

Many adults know the rules of walking safely on the road but children have to be taught how to stay safe on our roads.

In an interview in Accra, the Director in charge of Evaluation, Research and Training of the MTTD at the GPS Headquarters,

Superintendent  Alexander Kweku Obeng, noted that young children were impulsive and often ran out into the road unexpectedly and ended up being hit by vehicles.

“Apart from this, children have trouble locating sounds and might be confused to tell which direction a vehicle is coming from as they are shorter than adults and may find it hard to see obstacles around them, such as parked cars or bushes and then cross the road only to be knocked down by a vehicle,” he added.

Another reason why adults should not allow children to cross the road by themselves, he noted, was because children had limited perception of speed and distance so the child might not be able to tell how fast a car is moving or how far away a car is.

Supt. Obeng observed that many parents assumed that their children above five years  were old enough to cross the road by themselves and, therefore, left them to go to school, church or ask them to run errands for them.

He said a parent who exposed his or her child to dangers on the road stood the risk of being arrested, investigated and prosecuted so they should always assist their children to cross the road.

Children on the roads
Mr Obeng advised children not to forget their safety tips anytime they used the road.

He said they should always walk in groups and not alone so that together they could cross the road and they should also not forget to walk facing traffic in order to be able to act quickly when a vehicle posed danger to them.

“When crossing the road, always make sure to have eye contact with the driver as a way of letting him or her know that you want to cross the road and always cross the road at the zebra crossing,” he pointed out.

Supt. Obeng tasked children to always use the footbridges where they had been provided and not copy their parents or adults who crossed the roads without using the footbridges.

“Never play along the roadside because we have lost many children who were going to retrieve their footballs from the roads or streets and were knocked down by a vehicle,” he said.

Children in vehicles
He said children could also be injured or killed while in a vehicle so adults travelling with them should make sure babies and toddlers were buckled up on the back seats of the vehicles.

Supt. Obeng said children above five years could be allowed to seat on the front seat but the adult should make sure “he or she has the seat belt on.”

“Children should not be allowed to ride the motorcycle themselves but  when they are passengers on the motorcycle, the rider should make sure the child wears protective gear,” he added.

Drivers on the road
He pointed out that drivers should adhere to urban road and highway regulations so that they don’t speed.

He explained for instance that because urban roads were shared, drivers should know that “they don’t have to drive above 50 kilometres per an hour.”

“This is because children who do not appreciate speed may step on the road at a time when the driver least expected. If  the speed is moderate, the driver would be able to prevent an accident where the child’s life could be lost,” he said.

He warned drivers to be extra cautious when approaching junctions, crossroads, roundabouts and intersections to prevent accidents.

Supt. Obeng said keeping children safe on the road should be a shared responsibility for parents, guardians, the children themselves and the community as a whole so all should play their part to ensure maximum safety on the roads.

• Don’t ride motorcycles without helmets or overload them.
• Don’t use ear pieces and mobile phones while riding.
• Don’t hold onto moving vehicles