US offers Japan condolences over 'IS killing'

US President Barack Obama has telephoned Japan's Prime Minister Shinzo Abe to offer his condolences after the apparent murder of a Japanese hostage by Islamic State.

Mr Obama said the US stood "shoulder to shoulder" with Japan.

Mr Abe said he accepted that a video claiming Haruna Yukawa had been killed by IS was likely to be authentic.

The prime minister has demanded the release of a second Japanese hostage in the video, said to be Kenji Goto.

The White House said Mr Obama had called Mr Abe to "offer condolences for the murder by IS of Japanese citizen Haruna Yukawa and to convey solidarity with the Japanese people".

It added: "He also expressed appreciation for Japan's significant contributions of humanitarian assistance to the Middle East region. The two leaders agreed to continue their cooperation on a range of regional and global issues."

Mr Abe condemned the apparent killing, telling Japanese television: "Such an act of terrorism is outrageous and unforgivable. I condemn it strongly and resolutely."

He demanded the immediate release of the second hostage, freelance journalist Kenji Goto.

Mr Yukawa's father, Shoichi, has spoken of his feelings after he learnt the news of the video.

"I thought, 'Ah, this finally happened' and was filled with regret. I went totally blank, I was only sorry... I had no words. In my mind I wish very much that this wasn't true."

He added: "If I am ever reunited with him, I just want to give him a big hug."

The video shows Mr Goto holding a picture of what appears to be the body of Mr Yukawa.

A voice on the video issues a new demand for the release of Sajida al-Rishawi, an Iraqi woman sentenced to death in Jordan over deadly bombings in Amman in 2005.

Mr Goto's mother, Junko Ishido, said on Sunday: "I'm petrified. He has children. I'm praying he will return soon, and that's all I want.

"Japan never abandons its people. I believe the government is united and doing its best."

Some uncertainty does remain over whether the video released on Saturday actually comes from Islamic State.

Unlike similar previous videos, the latest recording does not carry the logo of any IS media arms, and consists of an audio message with a still image. Other official videos have shown moving footage.

Mr Yukawa, 42, was seized by militants in Syria in August. He had told friends and family that he wanted to eventually provide security to Japanese companies in conflict areas. 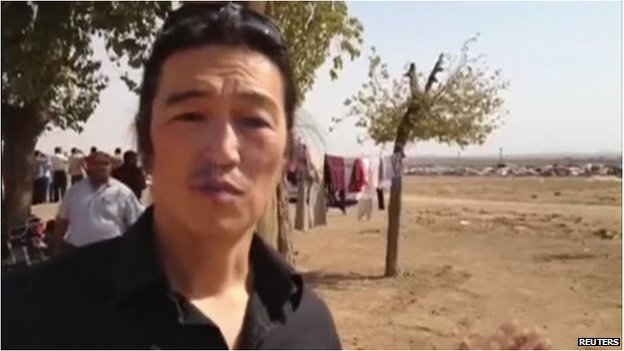 Mr Goto, 47, is a well-known freelance journalist and documentary film-maker who went to Syria in October, reportedly to try to get Mr Yukawa released.

In a video released on Tuesday, a masked man was shown standing over kneeling hostages named as Mr Yukawa and Mr Goto and demanding the ransom.

The ransom sum was the same amount as that pledged by Mr Abe for non-military aid for countries fighting IS.