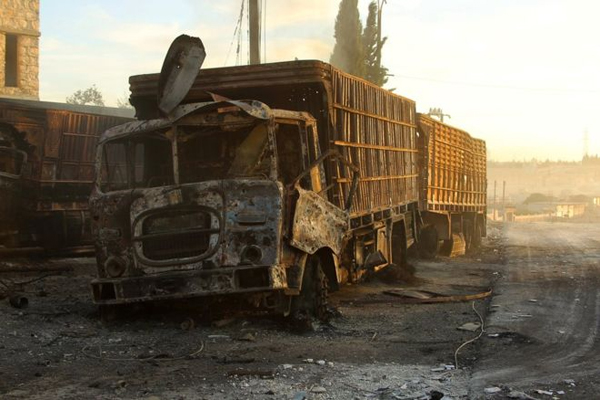 The UN has suspended all aid convoys in Syria after its lorries were attacked by warplanes near Aleppo on Monday.

The convoy had received proper permits, and all warring parties - including Russia and the US - had been notified, a UN spokesman said.

Eighteen of the 31 lorries, containing wheat, winter clothes and medical supplies, were destroyed.

A senior official of the Syrian Arab Red Crescent was among a number of civilians killed.

The President of the International Committee of the Red Cross, Peter Maurer, has described the attack as a "flagrant violation of international humanitarian law".

The US has expressed "outrage" over the attack, which took place in the town of Urum al-Kubra hours after the Syrian army declared a US-Russian brokered truce over.

Washington has said it will "reassess the future prospects for co-operation" with Russia - an ally of Syria's government.

Aid deliveries to besieged areas had been a key part of the cessation of hostilities deal brokered last week.

The Syrian Observatory for Human Rights, a UK-based monitoring group, said the attacks were carried out by either Syrian or Russian aircraft.

It said the dead included Red Crescent volunteers and drivers.

The convoy was being unloaded at a Red Crescent warehouse when it came under attack. It had been due to deliver aid for 78,000 people in rebel-held areas near Aleppo.

A health clinic near the warehouse was also badly damaged.

"The destination of this convoy was known to the Syrian regime and the Russian Federation," state department spokesman John Kirby said.

"And yet these aid workers were killed in their attempt to provide relief to the Syrian people," he added.

The attack appeared to signal the collapse of the latest effort by the US, which backs the rebels, and Russia to halt the violence in Syria, with the army there saying the deal was over.

"We don't know if it can be salvaged," a senior US official told journalists on condition of anonymity.

"At this point the Russians have to demonstrate very quickly their seriousness of purpose because otherwise there will be nothing to extend and nothing to salvage."

After the army announcement, activists said Aleppo and the surrounding area had been targeted.

A member of the White Helmets group that helps civilians caught in the violence said there had been "heavy bombing on many neighbourhoods" of Aleppo, causing multiple casualties.

"Our rescue teams are now trying to get people from under the rubble," Ismail told the BBC's Newsday programme. "The situation has changed completely. Before the sky was clear. Now I hear warplanes."

He said people risked dying "in two ways - from bombing, and the lack of food, the lack of basic needs", and appealed for renewed international efforts.

"Do something to save these kids who do not know what this war is."

The Syrian military and rebels had already accused each other of violations before the latest incidents.

The US and Russia are to hold further talks on the Syrian situation in New York on Tuesday, the state department said.