Russia and US agree to hold Syria conference 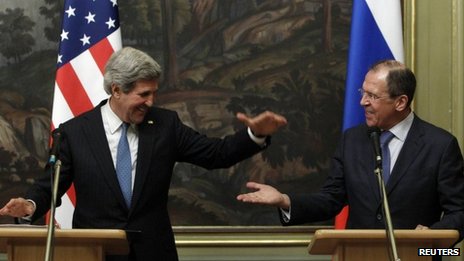 Russia and the US have agreed to work towards convening an international conference to find a political solution to the conflict in Syria.

Foreign Minister Sergei Lavrov and Secretary of State John Kerry announced it would follow on from an Action Group for Syria meeting in Geneva last June.

Mr Kerry said they would try to "bring both sides to the table".

Relations between Moscow and Washington have been strained in the last two years by differences over Syria.

Mr Kerry held lengthy talks with President Vladimir Putin on Tuesday during his first visit to Moscow since becoming secretary of state.

He told Mr Putin that their two countries shared "some very significant common interests with respect to Syria", including "

stability in the region" and "not letting extremists create problems".

"It is my hope that today we will be able to dig into that a little bit, and see if we can find common ground," he added.

He then held further discussions with Mr Lavrov, after which they jointly announced that they would try to organise an international conference on ending the conflict in Syria, if possible before the end of May.

It will try to convince both the Syrian government and opposition to accept a solution based on the core elements of the final communique issued on 30 June 2012, after the UN-backed Action Group for Syria meeting.

The communique called for an immediate cessation of violence and the establishment of a transitional government that could include officials serving under President Bashar al-Assad and members of the opposition.

"We believe that the Geneva communique is the important track to end the bloodshed in Syria," Mr Kerry told a news conference, warning that it must not be a "piece of paper" but rather "the roadmap" for peace.

Mr Lavrov praised the Syrian government for its willingness to discuss a political transition, but criticised the opposition for not having "said a single word yet which would show their commitment".

He also reaffirmed Moscow's belief that the departure of President Assad should not be a condition for peace talks, but insisted he was not trying to keep him in power.

The BBC's Steve Rosenberg in Moscow says the plan based on the Geneva communique has not worked so far, and even with the redoubling of US and Russian diplomatic efforts there is no guarantee it will now.

After his visit to Russia, Mr Kerry will travel to Rome to meet Italian, Israeli and Jordanian officials to discuss Middle East issues, including the stalled Israeli-Palestinian peace process.