Hassan Rouhani is Iran's next president 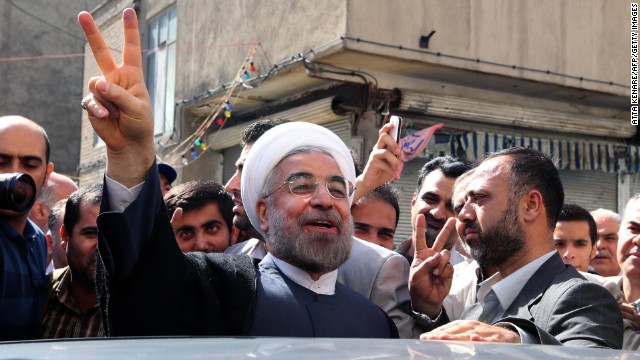 The lines extended into the street at times Friday, as voters waited to pick their choice to succeed two-term President Mahmoud Ahmadinejad in the country's 11th presidential election.

Rouhani takes Ahmadinejad's mantle as one of the country's most visible figures, at a time when it's dealing with painful economic sanctions tied to international concern about its nuclear program.

But he won't be Iran's most powerful man. That distinction belongs to Ayatollah Ali Khamenei, who has been Iran's supreme leader since 1989. He's got plenty of backing, from conservative citizens to loyalist militia groups to, most notably, the Revolutionary Guard.

Velayati, Ghalibaf and Jalili, who is Iran's chief nuclear negotiator, are considered close to Khamenei and would have been unlikely to challenge his authority. Of the three, Jalili had enjoyed the most popular support going into the vote.

Earlier, British Prime Minister David Cameron told CNN's Richard Quest that the international community "will have to deal with whatever the situation is."

"We have to remember this is always only an election between a restricted number of candidates, it's not democracy as we know it," he said.

"We have a very clear message to the Iranian government, which is that there is an option that gets Iran back into the international community, back into the family of nations. But it's got to be proper cooperation on this nuclear dossier, where so little progress frankly has been made. Otherwise, we will continue with the sanctions."

It was Iran's Guardian Council, an unelected body made up of six clerics and six lawyers operating under the oversight of the supreme leader, that drew up the restricted list of candidates from the 680 who initially registered.

Eight candidates were approved, two of whom subsequently dropped out.

The final six contenders didn't include any women. Nor did they include Ahmadinejad's aide and protege Esfandiar Rahim Mashaei, who was among those excluded by the Guardian Council.

Rouhani had the backing of the highly influential former President Akbar Hashemi Rafsanjani and appears to have won over parts of Iran's subdued reform movement.

The 65-year-old cleric's campaign began to gather steam last month, when he dared to accuse the state media of censorship and lies during a live interview on state TV, and then criticized the government's tight grip on security at a televised rally a few days later.

Despite his growing popularity among opposition circles, Rouhani has long been a part of Iran's ruling establishment.

The only cleric among the candidates, he has close ties to Khamenei and served in Iran's parliament for two decades. He was also Iran's lead nuclear negotiator from 2003 to 2005 and currently holds seats on several powerful decision-making bodies.

Hours into the voting Friday, Rouhani complained of a voting irregularity. A reform candidate, Mohammed Aref, who dropped out of the race earlier in the week, is still on some ballots.

Rouhani was worried that voters might mistakenly select Aref, which would amount to a vote thrown away. It was not clear how many ballot papers were concerned.