Zambia election: President claims vote was not free and fair 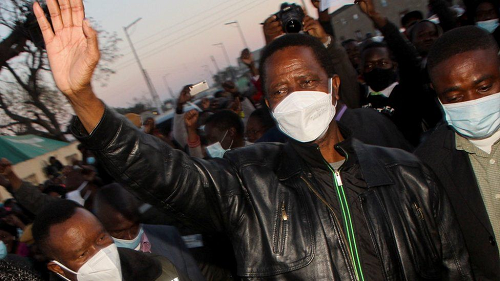 Zambia's incumbent president has described Thursday's elections as "not free and fair".

The president said election officials from his party Patriotic Front had been chased from polling stations, leaving votes unprotected.

In response, Mr Hichilema said the statement was the "desperate final act of an outgoing administration".

Mr Lungu, who is seeking a second term, also said that violence in provinces where he lost votes had rendered "the whole exercise a nullity".

The party, he added, was considering its next course of action.

Zambia's electoral commission is yet to respond.

Mr Lungu referenced the killing of a Patriotic Front chairman in North Western province and of another young party activist in clashes earlier this month. When the deaths occurred, the president brought in army reinforcements.

European Union election observers said in a preliminary report that the vote was "marred by unequal campaign restrictions, restrictions on freedoms of assembly and movement, and abuse of incumbency".

Social media and internet access was also shut down on Thursday. On Friday the High Court in Lusaka ruled that access to the internet should be fully restored.

The results of the election were initially expected on Friday.

However, the announcement was halted after some party election officials criticised the commission for trying to declare results that hadn't yet been verified.

A candidate can dispute an election by filing a petition in the country's Constitutional Court. This stops the winning candidate from exercising executive powers until the petition is heard in court.