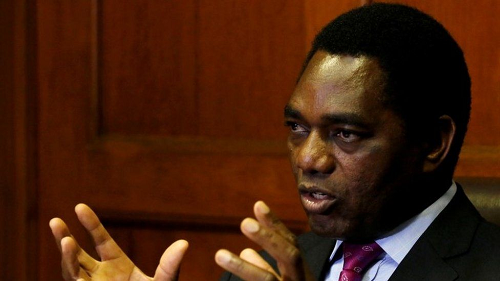 It was Mr Hichilema's sixth attempt at winning the presidency. His supporters have been celebrating on the streets of the capital, Lusaka.

Earlier, Mr Lungu alleged that the elections were not free and fair.

He said election officials from his Patriotic Front party had been chased from polling stations, leaving votes unprotected.

In response, Mr Hichilema's United Party for National Development said the statement was the "desperate final act of an outgoing administration".

In its final tally, the electoral commission said Mr Hichilema had won 2,810,777 votes to Mr Lungu's 1,814,201 in Thursday's election. There were seven million registered voters.

The landslide win means Mr Hichilema will not have to fight a run-off contest.

"I therefore declare that the said Hichilema to be president of Zambia," commission chairman Esau Chulu announced at the results centre in Lusaka.

He now faces the daunting challenge of turning around the country's economic fortunes.

A youth-driven wave of change

Celebrations which started on Sunday continued until sunrise as Zambia was painted red by supporters of Hakainde Hichilema.

There's no doubt that that political winds of change were ushered in by young people who are often accused of being reluctant to vote. They turned up in high numbers and generally rejected President Edgar Lungu.

"We want jobs, young people want jobs," chanted throngs of people as they filled the streets of the capital shortly after Mr Hichilema was declared the seventh president of this copper-rich nation.

There's no doubt that Mr Hichilema will inherit the rot and will attempt to clean up corruption left by his predecessor.

That's if President Lungu respects the will of the people and hands over power. He claimed the election wasn't free and fair after he lost votes in many of his traditional strongholds.

He said elections were characterised by violence, which is in direct contrast with regional and international observers, whose preliminary findings said the elections were relatively peaceful despite pockets of violence, political interference and an uneven playing field which favoured the governing Patriotic Front.

A concession speech hasn't been made by the incumbent even after losing by close to one million votes. Mr Lungu is expected to approach the courts to challenge the result but the margin of his defeat might make it hard for judges to overturn the result.

Who is Hakainde Hichilema?
Mr Hichilema was born into humble beginnings in the southern district of Monze.

He managed to get a scholarship to the University of Zambia, and later graduated with an MBA degree from the University of Birmingham in the UK. He went on to become one of Zambia's richest men, with business interests in finance, ranching, property, healthcare and tourism.