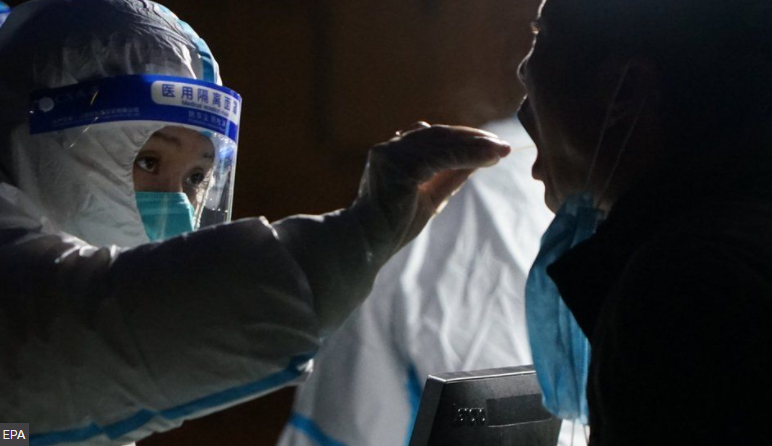 Yuzhou - which has a population of 1.1 million - saw its transport system shut down and all but essential food stores closed overnight.

It follows a similar lockdown in Xi'an, where 13 million have been confined to their homes since 23 December.

The strict measures come ahead of the Lunar New Year and the Winter Olympics due to be held in Beijing.

As part of this system, thousands of staff and volunteers started entering a bubble on Tuesday, which will see them have no physical contact with the outside world in order to limit the spread.

Participants and international media arriving the cover the Games will also enter the bubble on arrival in China, where they will remain for the duration of their stay.

The carefully managed bubbles fit with China's "Covid-zero" policy, which has seen it focus on stamping out the virus rather than live with it over the past two years.

In Yuzhou, some 700km (434 miles) south-west of Beijing, officials said that "to curb and quash the epidemic within the shortest amount of time is a high-priority political task" for both citizens and government employees.

All residents were told to remain indoors, with only those involved in containing the disease allowed to leave.

A similar policy has been in place in Xi'an, in western China, for almost two weeks. It reported 95 symptomatic cases on Monday, down from a peak of more than 150 per day at the height of the outbreak, news agency Reuters reports.

But while the strict lockdown appears to reducing case numbers, it has caused other issues. Social media posts show how residents have been forced to barter supplies amid worries over food shortages.

"People are swapping stuff with others in the same building, because they no longer have enough food to eat," a resident surnamed Wang told Radio Free Asia. The news outlet also reported that another man had wanted to trade a smartphone and tablet for rice.

Covid first appeared in China and up until a few weeks ago the government had managed to contain it to such a level that new cases were negligible and mainly coming from people arriving from abroad.

What Beijing calls its "dynamic zero Covid" strategy combines mass vaccination with a regime of constant testing, nationwide monitoring of people's movements, temperature-taking and phone apps to prove you don't pose a threat. All of that amounts to hyper vigilance about any new outbreak - if and when one is spotted the reaction is severe.

China has been wedded to this approach since the beginning because it's likely the leaders from Xi Jinping down consider anything less would cause illness and death on a scale that would be politically, economically and socially unacceptable.

The ruling Communist Party took much of the credit for containing the virus early on - after it had spread beyond China's borders - and diverting from that would undermine its credibility.

There is a broad acceptance of this approach, and the stringent restrictions it can bring, among many Chinese who for decades have not felt they can rely much on the public health system. So illness and the prospect of losing your job, let alone your life, are existentially daunting.

Add to that the prestige attached to - safely - hosting another Olympic Games in a few weeks' time and the fast approaching Chinese New Year mass migration of millions across this country and there is clearly little doubt the government will remain committed to "zero Covid" for the foreseeable future.