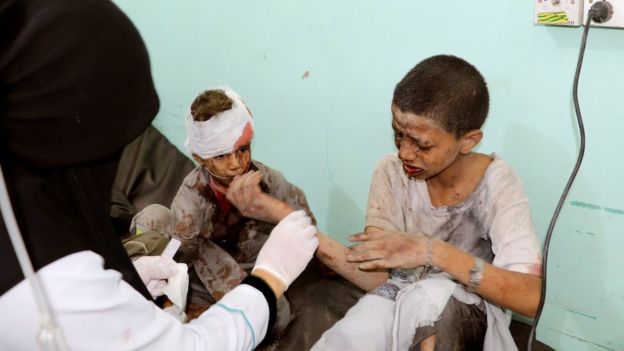 At least 29 children have been killed and 30 wounded in a Saudi-led coalition air strike in Yemen, the International Committee of the Red Cross says.

The children were travelling on a bus that was hit at a market in Dahyan, in the northern province of Saada.

The health ministry run by the rebel Houthi movement put the death toll at 43, and said 61 people were wounded.

The coalition, which is backing Yemen's government in a war with the Houthis, said its actions were "legitimate".

It insists it never deliberately targets civilians, but human rights groups have accused it of bombing markets, schools, hospitals and residential areas.

Meanwhile the new UN special envoy to Yemen, former British diplomat Martin Griffiths, is planning to invite the warring parties to Geneva in September to discuss a framework for negotiations.

He told the BBC's Lyse Doucet that if the conflict is left unresolved, Yemen could collapse and the international community could be looking at "Syria-plus" in the years to come.

"The war in Yemen will get more complicated the longer it goes on. There will be more international interest and polarisation in terms of the parties, it will fragment further, it will be more difficult to resolve - even more than it is now."

What happened in Saada?

Yemeni tribal elders told the Associated Press that the bus was hit as it passed through Dahyan market and that it was transporting local civilians, including many school children.

The charity Save the Children said it had been told by its staff that the children were on their way back to school from a picnic when the driver of their bus stopped to get a drink.

The vehicle was stationary when the attack happened, it added.

The ICRC said a hospital it supported in Saada had received the bodies of 29 children, all of them under the age of 15, and 48 injured people, among them 30 children.

It sent additional supplies to the hospital to cope with the influx of patients.

Houthi-run Al-Masirah TV reported that 47 people were killed and 77 wounded, and broadcast graphic pictures showing the bodies of several young children, some of them wearing school uniform.

What has been the reaction?

The ICRC stressed that "under international humanitarian law, civilians must be protected during conflict", while the secretary-general of the Norwegian Refugee Council Jan Egeland called it a "grotesque, shameful" attack that showed "blatant disregard for rules of war".

Save the Children described the incident as "horrific", and called for a full, immediate and independent investigation into recent attacks on civilians and civilian infrastructure.

It was not immediately clear whether the bus was the target of the air strike, but coalition spokesman Col Turki al-Malki said the attack was "a legitimate military action, conducted in conformity with international humanitarian law".

He said it had hit "militants responsible for planning and targeting civilians" in the southern Saudi city of Jizan on Wednesday night, where one Yemeni resident was killed and 11 others were injured by fragments from an intercepted ballistic missile that was launched by the Houthis from neighbouring Amran province.

He accused the rebels of using children as "tools and covers for their terrorist acts".

A week ago, at least 55 civilians were killed and 170 others wounded in a series of attacks on the rebel-held Red Sea port city of Hudaydah. The coalition denied that it had carried out air strikes in the area, and blamed the deaths on rebel mortar fire.

Why is there a war in Yemen?

Yemen has been devastated by a conflict that escalated in early 2015, when the Houthis seized control of much of the west of the country and forced President Abdrabbuh Mansour Hadi to flee abroad.

Alarmed by the rise of a group they saw as an Iranian proxy, the UAE, Saudi Arabia and seven other Arab states intervened in an attempt to restore the government.

Almost 10,000 people - two-thirds of them civilians - have been killed and 55,000 others injured in the fighting, according to the United Nations.

The fighting and a partial blockade by the coalition has also left 22 million people in need of humanitarian aid, created the world's largest food security emergency, and led to a cholera outbreak that is thought to have affected a million people.