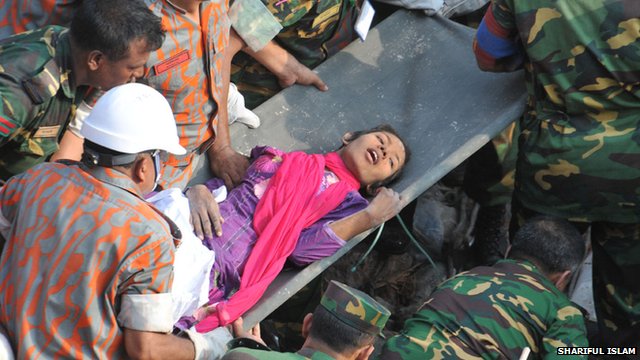 A woman has been pulled alive from the ruins of an eight-storey building that collapsed in a suburb of Bangladesh's capital, Dhaka, 17 days ago.

Rescuers said the woman, named Reshma, was found in the remains of the second floor of the Rana Plaza after they heard her crying: "Please save me."

She has been taken to hospital, but is not thought to have serious injuries.

More than 1,000 are now confirmed to have died, most of them women working in clothes factories.

The authorities said 2,437 people had been rescued, of whom about 1,000 had suffered serious injuries.

Dozens lost limbs as they were cut free from the wreckage.

The accident is one of the deadliest industrial disasters in history.

Crews using heavy machinery have begun removing rubble from the worst-damaged areas, and are expecting to find more bodies.

"When the building started to collapse, workers thought they would be safe under the staircases. Each time we moved a slab of concrete, we found a stack of bodies," he said.

Soldiers were reported to have been preparing to break through a large concrete slab at about 15:15 local time (10:15 GMT) on Friday when the woman was discovered.

The worker who first discovered her told the BBC Bengali service: "I was cutting iron rods when I suddenly found a silvery stick just moving from a hole.

"I looked closer and heard someone calling 'Please save me'. I immediately called over soldiers and firefighters."

Crews saw a woman waving her hand, and she shouted "I'm still here" and told rescuers her name was Reshma.

Within minutes, hundreds of soldiers and firefighters rushed to the scene to help clear the rubble, says the BBC's Akbar Hossain in Dhaka.

The woman said that she was not badly hurt, and she was given water and biscuits while handsaws and drilling equipment were brought in to cut through iron rods and debris.

Rescuers worked for 40 minutes before finally pulling her from the rubble, amid cheers from the crowd.

She was taken to an ambulance and then rushed to the nearby Combined Military Hospital for evaluation and treatment.

She later told local TV from her hospital bed that she never dreamt she would see daylight again.

"I heard voices of the rescue workers for several days. I kept hitting the wreckage with sticks and rods to attract their attention. No-one heard me," she said.

"I ate dried food for 15 days. The last two days I had nothing but water."

Her sister, Fatima, said the family had given up hope.

"When I first saw her on the TV, and when I realised that she was still alive, I was ecstatic," she told the BBC.

Prime Minister Sheikh Hasina, whose government has been criticised for lax oversight of the clothing industry, spoke to the woman on the telephone.

Ms Hasina was reportedly flying to the hospital by helicopter to meet her.

Rana Plaza had housed several factories that made clothes for companies including Western retailers.

A preliminary government report suggested the collapse was triggered when electricity generators switched on during a blackout.

At least nine people have been arrested over the accident, including the owner of the building and several factory bosses.