US travel warning over Egypt clashes 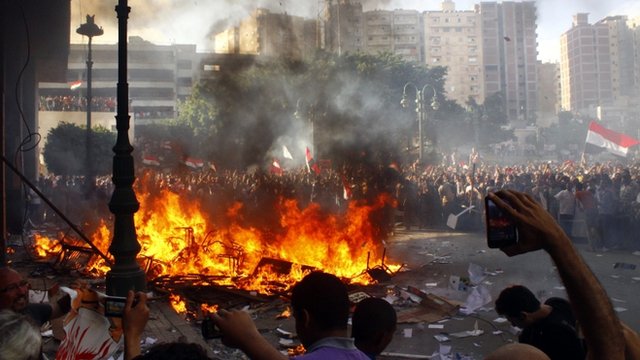 The US has warned Americans not to travel to Egypt and has told non-emergency diplomatic staff to leave, as clashes continue in the country.

The state department also urged US nationals in Egypt "to remain alert".

The warning came as at least three people - including a US citizen - died in clashes between supporters and opponents of President Mohammed Morsi.

Tensions have been rising ahead of a mass rally planned by the opposition on Sunday to demand Mr Morsi steps down.

His supporters are stressing what they see as Mr Morsi's "legitimacy", rejecting the opposition's demand.

Sunday is the first anniversary of the president's inauguration.

Speaking during an official visit to South Africa, US President Barack Obama said the US was "looking with concern" at the situation in Egypt.

He said the US's "immediate concern" was with securing its embassies and consulates, and their staff.

"We support peaceful protests and peaceful methods of bringing about change in Egypt," Mr Obama said, but he added that every party had to "denounce violence".

Earlier, the UN Secretary-General Ban Ki-moon urged Egyptians to respect "universal principles of peaceful dialogue" amid growing concern over the tension between Mr Morsi's supporters and his opponents.

In a warning on Friday, the US state department said it had "authorised the departure of a limited number of non-emergency employees and family members" from Egypt.

It asked Americans "to defer non-essential travel to Egypt at this time due to the continuing possibility of political and social unrest".

Cairo's main airport was packed with departing passengers, and all flights leaving for Europe, the US and the Gulf were fully booked, officials were quoted as saying.

The officials - who spoke on condition of anonymity - described the exodus as unprecedented, the Associated Press reports.

On Friday, two people died in the northern Egyptian city of Alexandria as protesters stormed an office of the Muslim Brotherhood - the political movement supporting President Morsi. It was one of eight of its offices around the country the Brotherhood said came under attack.

The US national who was killed was apparently using a mobile phone to take pictures at the time.

There are conflicting reports about the way he died. Egyptian officials say the victim was stabbed in the chest, but other reports say he was hit by gun pellets.

A statement posted on the website of Kenyon College, Ohio, identified the victim as 21-year-old student Andrew Pochter, an intern at Amideast, an American non-profit organisation working in international education and training in the Middle East and North Africa.

The other fatality in Alexandria on Friday was an Egyptian man who was shot dead, according to medical sources.

The office of the Muslim Brotherhood in the city was set on fire, and the authorities are reported to have called in riot police and army helicopters to try to quell the violence.

Some marchers said they feared the Brotherhood was using the revolution to entrench its power and Islamic law, but others had economic grievances.

"I've nothing to do with politics, but with the state we're in now, even a stone would cry out," 42-year-old accountant Mohamed Abdel Latif told Reuters news agency.

"There are no services, we can't find diesel or gasoline. We elected Morsi, but this is enough. Let him make way for someone else who can fix it."

In Port Said, also in the north, an explosion left one person dead - a journalist, according to one report - and five injured, officials said.

Meanwhile, in Cairo thousands of Morsi supporters rallied outside the main mosque.

"I came to support the legitimate order," said Ahmed al-Maghrabi, 37, a shopkeeper from the Nile Delta city of Mansoura.

"I am with the elected president. He needs to see out his term," he told Reuters.

He offered a dialogue with the opposition - a move rejected by his opponents.

Mr Morsi, who hails from the Muslim Brotherhood, became Egypt's first Islamist president on 30 June 2012, after winning an election considered free and fair.

His first year as president has been marred by constant political unrest and a sinking economy.