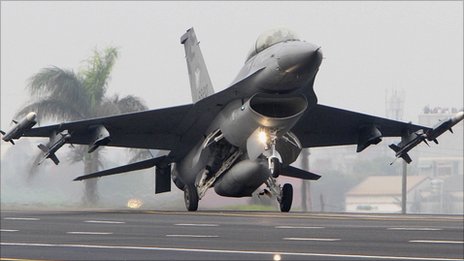 The US is going ahead with plans to deliver four F-16 fighter jets to Egypt despite the political unrest in the country, senior American officials say.

It comes as Washington is continuing to evaluate last week's overthrow of President Mohammed Morsi by the army.

US massive military aid to Cairo would have to be cut by law if the removal of the Islamist leader is determined by Washington to have been a coup.

The Muslim Brotherhood, which backs Mr Morsi, is demanding his reinstatement.

Its supporters have been staging mass protests near Cairo's barracks, where he is believed to be being held. On Monday, more than 50 Brotherhood loyalists were killed in clashes with the army.

The new authorities have not said where Mr Morsi it, but a foreign ministry spokesman said he was in a "safe place" and being treated in a "very dignified manner".

The US officials say Washington will deliver four F-16 fighter jets in the next few weeks.

They are part of an already agreed bigger order of 20 planes - eight of which were sent to Egypt in January. The final eight are expected to be shipped later this year.

White House spokesman Jay Carney on Wednesday reiterated that it would not be "in the best interests of the United States to make immediate changes to our assistance programmes".

He added that the administration would take its time to consider the implications of removing Mr Morsi from power.

President Barack Obama has been careful not to use the word "coup" in relation to events in Egypt, the BBC's Katy Watson in Washington reports, as doing so would trigger the legal requirement to cut off aid.

On Wednesday, arrest warrants were issued for the leader of the Muslim Brotherhood, Mohamed Badie, and nine other senior figures in the movement.

They are charged with inciting Monday's deadly violence in the capital, in which more than 50 Brotherhood supporters, a soldier and two policemen died.

The Brotherhood says the army fired on peaceful demonstrators and it is accusing the interim authorities of a cover up. The military, however, say soldiers acted in self-defence after being attacked by armed assailants.

Many Brotherhood members are already in detention and warrants are said to have been issued for hundreds more.

Correspondents say the new warrants could scupper any attempts to persuade the Brotherhood - banned for decades under former President Hosni Mubarak - to participate in the transitional political process.

The timetable for new elections was announced in a constitutional declaration by interim President Adly Mansour on Monday evening. It laid out plans to set up a panel to amend the suspended constitution within 15 days.

The changes would then be put to a referendum - to be organised within four months - which would pave the way for parliamentary elections, possibly in early 2014.

Once the new parliament convenes, elections would be called to appoint a new president.

The Brotherhood has rejected the transition plan and its political wing, the Freedom and Justice Party (FJP), has said it will turn down a post in the cabinet being formed by the interim Prime Minister Hazem al-Beblawi.

Mr Beblawi said on Thursday that he had not ruled out offering posts to the FJP.

"I don't look at political association," he told the AFP news agency.

"I'm taking two criteria for the next government. Efficiency and credibility."

The main liberal opposition coalition, the National Salvation Front (NSF), and the grassroots Tamarod protest movement, which co-ordinated the anti-Morsi protests, said they were not consulted on the decree and have concerns about it.