US and UK concern over Zimbabwe vote 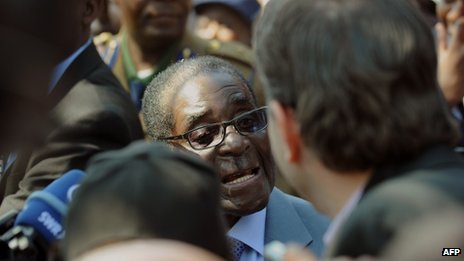 The US and UK have expressed concern after official results from Zimbabwe's elections gave President Robert Mugabe a seventh term in office amid claims of electoral fraud.

US Secretary of State John Kerry said the results did not "represent a credible expression of the people".

But the regional power South Africa has congratulated Mr Mugabe on his victory.

Mr Tsvangirai, though, rejected the vote for parliament and president as fraudulent and vowed to take legal action.

He said his Movement for Democratic Change (MDC) would no longer work with Mr Mugabe's Zanu-PF party and boycott government institutions.

The two parties have been in a coalition since 2009, after the last election sparked widespread violence.

Results from this week's parliamentary election handed the MDC a defeat. It won just 49 seats compared with Zanu-PF's 158.

The US has described the vote as "deeply flawed".

"In light of substantial electoral irregularities reported by domestic and regional observers, the United States does not believe that the results represent a credible expression of the will of the Zimbabwean people," Mr Kerry said.

Former colonial power the UK also expressed "grave concerns" over reports of large numbers of voters being turned away from polling stations.

Meanwhile the European Union which maintains sanctions on Mr Mugabe and his senior aides, said it was worried about "alleged irregularities and reports of incomplete participation" in the election.

Monitoring groups disagreed over the conduct of the election.

The most critical account came from the largest group of monitors, the Zimbabwe Election Support Network (ZESN), which had 7,000 workers observing the vote.

The organisation said problems with voter registration had left up to one million people unable to cast their ballots, mostly in urban areas regarded as MDC strongholds.

On Saturday, one of the nine members of the election commission resigned over the way the election was conducted.

Commissioner Mkhululi Nyathi said in his resignation letter: "While throughout the whole process I retained some measure of hope that the integrity of the whole process could be salvaged along the way, this was not to be."

However, the African Union, which had 70 observers, said its initial report suggested the election was "free and credible".

The AU's mission chief Olusegun Obasanjo said there had been "incidents that could have been avoided" and asked Zimbabwe's election authorities to investigate claims that voters had been turned away from polling stations.

The southern African regional bloc, Sadc, with 600 observers, broadly endorsed the election as "free and peaceful", but said it would reserve judgement on the fairness of the process.

In a news conference before the presidential result was announced, Mr Tsvangirai said Zimbabwe was "in mourning".

"The fraudulent and stolen election has launched Zimbabwe into a constitutional, political and economic crisis," he said.

He said he would produce a dossier of the alleged electoral fraud and he called on Sadc to investigate.

His MDC colleagues had earlier called for a campaign of civil disobedience to isolate Zanu-PF.

Mr Mugabe has been president since 1987. He became prime minister when Zimbabwe won independence from the UK in 1980.