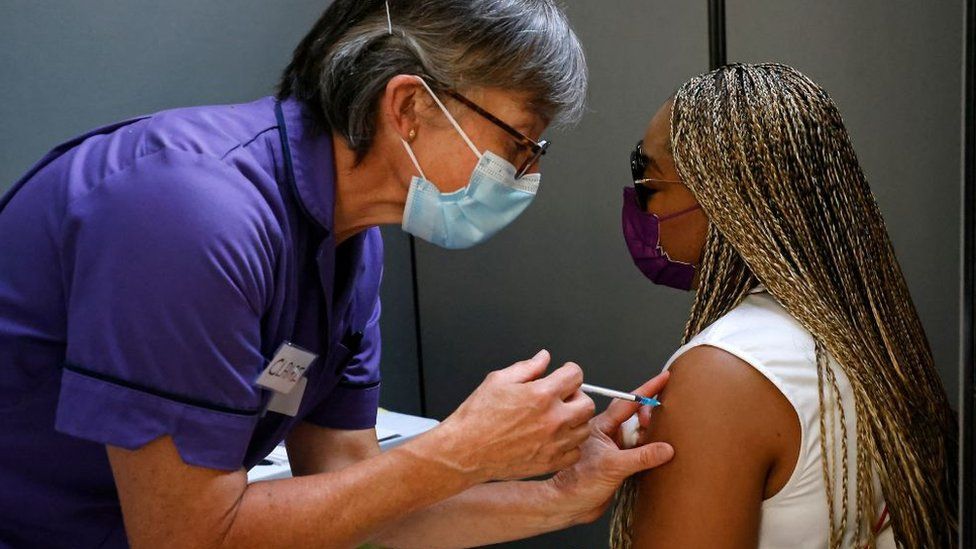 Every adult in the UK has been offered a Covid vaccine ahead of restrictions easing in England on Monday, the government says.

Around 88% of adults have had a first dose and around 68% have had both, according to the latest figures.

Prime Minister Boris Johnson said the vaccination target had been met and it was an "extraordinary achievement".

It comes as more than 50,000 daily cases were recorded on both Friday and Saturday - levels last seen in January.

Meanwhile, the Department of Health says no decisions have been made on whether children aged 12 to 17 should be routinely offered the Covid vaccine.

Officials were responding to a report in the Sunday Telegraph that the Joint Committee on Vaccination and Immunisation is believed to have advised ministers against a mass vaccination programme for all children until further evidence of the risks is available.

According to the Telegraph, guidance this week is expected to say the vaccine should be offered only to vulnerable 12 to 15-year-olds and to those who are within three months of turning 18.

More than 46 million people have been given a jab since the UK's Covid vaccine rollout began in December 2020.

Mr Johnson promised in February that all adults would be offered a first dose by the end of July, and the Health Secretary Sajid Javid said last month that the government wanted two-thirds of UK adults to have had two by 19 July.

The prime minister urged anyone who had not booked their vaccine to do so and thanked those who had taken up their offer.

"You are the reason we are able to cautiously ease restrictions next week, and return closer towards normal life," he said. "Now let's finish the job."

The health secretary, who has been doubled jabbed, announced on Saturday he had tested positive for coronavirus and was isolating. It is understood Mr Javid met Mr Johnson at Downing Street on Friday but it is not clear yet whether the prime minister or other ministers will also have to quarantine.

Almost all legal restrictions on social contact are to be lifted in England on Monday.

New travel rules will also come into effect, allowing people who are double-jabbed to return to the UK from amber list countries without quarantining - except for those returning to England, Wales and Scotland from France, because of concerns over the prevalence of the Beta variant there.

The prime minister has described England's approach to easing lockdown as "cautious but irreversible".

But Jeremy Hunt, chairman of the Commons health select committee, said on Saturday the government was likely to have to reintroduce some controls in the autumn, as rising case numbers and hospital admissions meant the NHS was facing a "very serious" situation.

England's deputy chief medical officer, Prof Jonathan Van-Tam, warned of a "bumpy winter" ahead. He urged people to approach the easing of restrictions in "a cautious, steady, gradual way".

Social distancing rules will end in England on Monday, although government guidelines advise face coverings should still be worn in enclosed spaces such as in shops and on public transport.

Scotland will move to level zero of Covid restrictions on Monday, meaning pubs and restaurants can open until midnight. However, limits on outdoor meetings will remain, the return of workers to offices will be delayed and face coverings will still be mandatory.

Most Covid rules in Wales are set to be scrapped from 7 August., but face coverings will still be required in most public places and on public transport.

In Northern Ireland, restrictions will be eased further on 26 July, if approved at a review on 22 July.