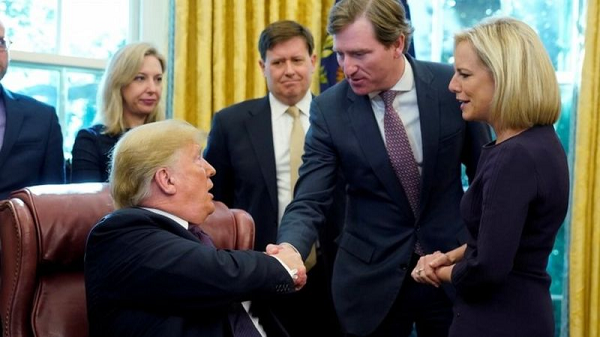 Chris Krebs was a Trump appointee

Donald Trump says he has fired a top election official who contradicted the US president's claims of voter fraud.

Mr Trump has refused to concede the US election, and has made unsubstantiated claims of "massive" voter fraud.

Election officials said the vote was the "most secure" in US history.

Mr Krebs is the latest official to be dismissed by the US president following his defeat, with Defense Secretary Mark Esper also shown the door amid reports Mr Trump doubted the Pentagon chief's loyalty.

There is speculation in Washington DC that before Mr Trump leaves office in January, CIA director Gina Haspel and FBI director Christopher Wray could also be for the chopping block.

Like many others fired by Mr Trump, Mr Krebs reportedly only learned he was out of a job when he saw the president's tweet on Tuesday.

But following his dismissal, the former Microsoft executive appeared to have no regrets.

He had run the agency from its inception two years ago in the aftermath of alleged Russian meddling in the 2016 election.

To guard against potential cyber-threats, Cisa works with state and local election officials and the private companies that supply voting systems, while monitoring ballot tabulation and the power grid.

Why was Krebs fired?

He had reportedly incurred the White House's displeasure over a Cisa website called Rumor Control, which debunked election misinformation, much of it amplified by the president himself.

Hours before he was fired, he posted a tweet that appeared to take aim at Mr Trump's allegation that voting machines in various states had switched ballots to Mr Biden.

Mr Krebs tweeted: "ICYMI: On allegations that election systems were manipulated, 59 election security experts all agree, 'in every case of which we are aware, these claims either have been unsubstantiated or are technically incoherent.' #Protect2020".

He was among senior officials from the Department of Homeland Security who last week declared the 3 November US general election the "most secure in American history", while rejecting "unfounded claims".

Though that statement did not name Mr Trump, on the same day it was published Mr Krebs retweeted a Twitter post by an election law expert saying: "Please don't retweet wild and baseless claims about voting machines, even if they're made by the president."

Mr Krebs' dismissal brought outrage from Democrats. A spokesman for President-elect Joe Biden said "Chris Krebs should be commended for his service in protecting our elections, not fired for telling the truth".

Krebs pays for his candour with his job

He knew his words would displease President Trump. Last Thursday he told associates he expected to be fired, and he was right.

He was put in an impossible position. Mr Trump said that his statements were inaccurate because of "massive improprieties and fraud" during the election.

But Mr Krebs' didn't find that.

Perhaps the president will produce a trove of material backing his statements up, but as yet he hasn't found evidence of this either.

Mr Krebs was therefore put in a position no one wants to be in - appease Donald Trump and say what he wants to hear - or risk his career by saying things his master would take umbrage to.

He chose the latter, and paid for it with his job.