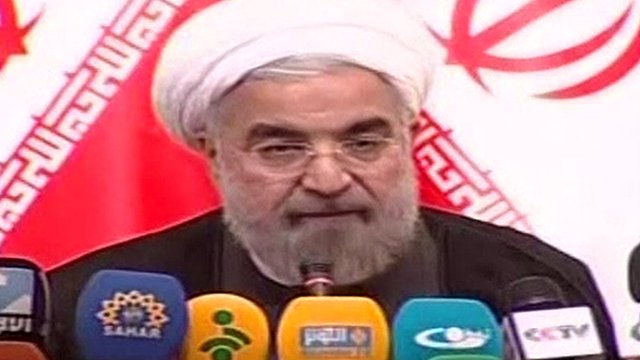 In his first news conference since Friday's election, Mr Rouhani described as "unfair" sanctions imposed on his country. He also said Tehran would not suspend uranium enrichment activities.

The UK said it hoped Mr Rouhani would act on his pledge to resolve the issue.

"The government hopes that following Dr Rouhani's election, the Iranian government will take up the opportunity of a new relationship with the international community by making every effort to reach a negotiated settlement on the nuclear issue," said UK Foreign Minister William Hague.

At his news conference, which covered a wide range of issues, Mr Rouhani also said:

The conference ended abruptly when a man in the audience shouted that reformist leader Mir Hossein Mousavi, who is currently under house arrest, should be president.

Mr Rouhani, a long-standing political figure in Iran, won just more than 50% of the vote in the election, avoiding a run-off vote.

"Our nuclear programmes are completely transparent," Mr Rouhani told a packed hall in the capital Tehran.

"But we are ready to show greater transparency and make clear for the whole world that the steps of the Islamic Republic of Iran are completely within international frameworks," he said.

But he stressed that he would oppose halting Iran's uranium enrichment - a key stumbling block in the continuing talks between Tehran and world powers.

Iran has been the target of four rounds of UN sanctions and numerous UN Security Council resolutions calling on it to cease enrichment work.

Israel has threatened to carry out air strikes on its long-time foe if its enrichment activities do not stop.

But on Monday, Mr Rouhani said: "The sanctions are unfair, the Iranian people are suffering, and our (nuclear) activities are legal.

"These sanctions are illegal and only benefit Israel."
Western hopes

Western powers have indicated they are willing to engage with the new Iranian president - who is seen as moderate compared with the other five contenders.

"If [Mr Rouhani] lives up to his obligations under the UN Security Council resolutions to come clean on this illicit nuclear programme, he will find a partner in us," White House Chief of Staff Denis McDonough told CBS News.

Tens of thousands of Iranians took to the streets after the results were announced on Saturday, many wearing Mr Rouhani's election colour of purple, but others dressed in the green of the reformist movement.

Parliament must approve his selections when he takes office in August.