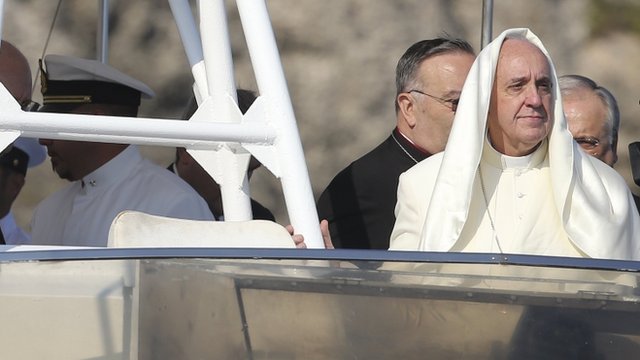 Pope Francis has said Mass for migrants on Italy's tiny island of Lampedusa, condemning the "global indifference" to their plight.

On arrival, he threw a wreath in the sea in memory of the many people who have drowned trying to reach Europe.

The island is struggling to cope with thousands of illegal migrants.

Lampedusa, about 80 miles (120km) from Tunisia, is one of the nearest gateways to Europe for Africans fleeing poverty and conflict.

Tens of thousands of migrants have made the dangerous crossing in recent years, usually packed into rickety wooden boats exposed to the elements.

As Francis arrived on a coast guard ship, dozens of Lampedusan fishing boats sailed in nearby.

The Pope is on his first pastoral visit outside Rome since his election in March.

"Pope Francis, only you can save us," read a banner on one of the boats.

"You're one of us," said a sign hanging from an apartment near the port.

Some residents threw flowers into the water and chanted "Viva il Papa" as his vessel docked.

Francis, an Argentine Jesuit, met and spoke to a few migrants, then rode in an open-topped car - rather than the Popemobile often used by predecessors - to the site for Mass, near a "boat cemetery" where the hulks of shipwrecked migrant boats lie in the sun.

His altar was a small, painted boat.

The Pope called for a "reawakening of consciences" to counter the "indifference" shown to migrants.

"We have lost a sense of brotherly responsibility," he said, and "have forgotten how to cry" for migrants lost at sea.

He denounced the traffickers who exploited migrants and took great risks with their lives.

Francis, whose own ancestors immigrated to Argentina from Italy, has previously stood in sympathy with impoverished illegal migrants.

Lampedusa's native population of 6,000 is often outnumbered by thousands of migrants in improvised camps around the island.

The UN refugee agency says 8,400 migrants have landed in Italy and Malta in the first six months of the year, almost twice as many as last year, but down on 2011, when tens of thousands fled north Africa during the Arab Spring.

The migrants are normally transported to reception centres on the Italian mainland to be identified and ease the burden on Lampedusa.