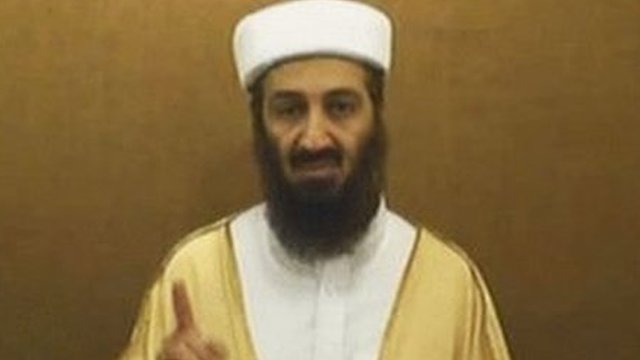 A version of the report leaked to al-Jazeera says the killing of Bin Laden by US forces was a "criminal act of murder" ordered by the US president.

It also reveals details of the al-Qaeda leader's whereabouts and day-to-day life after fleeing Afghanistan in 2001.

Bin Laden was killed by US forces in north-west Pakistan in May 2011.

US suspicions about Bin Laden's location had previously been dismissed by Pakistan. However, his discovery in a compound in Abbottabad and subsequent killing in a US Navy Seal operation put a strain on US-Pakistan relations.

Shortly after the raid, the Pakistan parliament called for an independent enquiry - the Abbottabad Commission - to establish whether the failures of the government were due to incompetence or colluding with al-Qaeda.

It was also commissioned to investigate the Pakistani intelligence services' failure to detect CIA activity on its soil in the run-up to the raid "that culminated in the avoidable humiliation of the people of Pakistan".

In its findings, the report described the lack of intelligence as "government implosion syndrome".

The leaked documents fiercely criticised the Pakistani government and military, describing "culpable negligence and incompetence at almost all levels of government".

While the commission said it found nothing to support allegations of complicity, it said it could not rule out "the possibility of some degree of connivance inside or outside the government".

The report also voiced harsh criticism of the Navy Seal raid on Abbottabad, describing it as an "American act of war" and Pakistan's "greatest humiliation" since East Pakistan seceded in 1971.

It quotes officials as saying that Pakistan air force jets were scrambled to shoot down the US helicopters, but too late.

The 336-page document was the result of interviews with more than 200 witnesses, including senior civilian and military officials, as well as with Bin Laden's three widows prior to their deportation to Saudi Arabia.

The report has been in the hands of the government for more than six months, the BBC's Richard Galpin says, but it had been kept under wraps.

In the version leaked to al-Jazeera, the daily life of Bin Laden after fleeing the US-led invasion of Afghanistan in 2001 is documented.

He was reported to have arrived in Pakistan in the spring or summer of 2002, staying in parts of South Waziristan, Bajaur, Peshawar, Swat and Haripur before settling in Abbottabad in 2005.

The wife of one of Bin Laden's aides, Maryam, was quoted saying police in Swat even stopped the al-Qaeda leader's vehicle for speeding in 2002 or 2003 - but failed to recognise him.

Referring to Bin Laden and his entourage, the report said: "They kept a very low profile and lived extremely frugally. They never exposed themselves to public view."

Testimony from his widows said he wore a cowboy hat whilst moving around the compound to avoid detection.

However, over a period of six years the unusual nature of the compound failed to the draw the attention of the intelligence services, the report goes on.

"How the entire neighbourhood, local officials, police and security and intelligence officials all missed the size, the strange shape, the barbed wire, the lack of cars and visitors etc over a period of nearly six years beggars belief."

Commenting on the leak, the head of the commission, Javed Iqbal, told Pakistani Dunya TV that it was "based on assumptions" and did not include even one out of more than 100 recommendations the commission had made in its findings.