Obasanjo: I have not been rejected as Ethiopia mediator 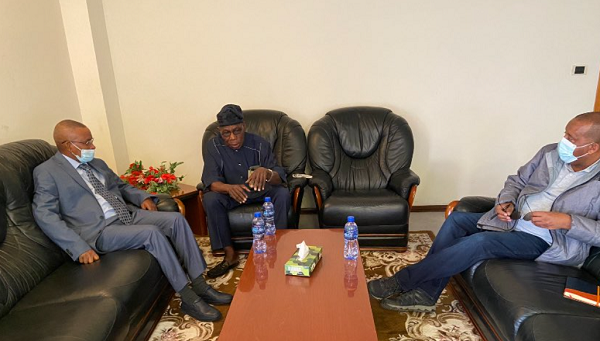 Obasanjo: I have not been rejected as Ethiopia mediator

Nigeria's former president, Olusegun Obasanjo, has quashed rumours that he was not welcome in Ethiopia as a mediator in the crisis there.

"Nobody has rejected my mediation," Mr Obasanjo told BBC Focus on Africa radio from Ethiopia where he has been meeting people from both sides of the conflict in his role as African Union envoy.

"The Prime Minister [Abiy Ahmed] has given me every attention I have asked for. He has treated me with utmost courtesy."

Then, referring to his trip on Sunday to the capital of the Tigray regional state, Mekelle, Mr Obasanjo said: "The president of Tigray... received me the way I would be received by an African leader... so the idea of shunning and not receiving me and all that is incorrect."

"Everybody is saying: 'Look, we appreciate you being appointed. We know this is the way to go. We want somebody who is an honest broker... and we can't get anybody better than you.'"

But what of talks to bring an end to the year-long conflict that has left millions desperately in need of food aid?

The former Nigerian president would not be drawn on this.

He said at this stage he is "trying to find out what are the issues of importance to different groups" before broaching the subject of negotiations.

#PresidentDebretsion of #Tigray had very fruitful discussion with President #OlesegunObasanjo, #AU special Envoy for the Horn of Africa.#Debretsion briefed #ChiefObosanjo on where #Tigray stands regarding the ongoing crisis in Ethiopia. It was a good meeting.#TigrayShallPrevail! pic.twitter.com/6jceA3sd16