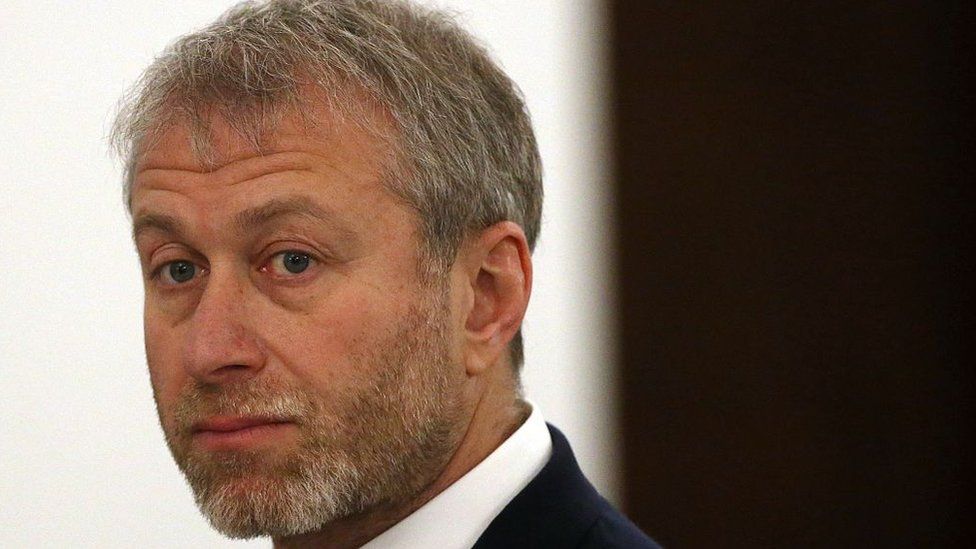 A BBC investigation has uncovered new evidence about the corrupt deals that made Roman Abramovich's fortune.

The Chelsea owner made billions after buying an oil company from the Russian government in a rigged auction in 1995.

His lawyers say there is no basis for alleging he has amassed very substantial wealth through criminality.

The Russian billionaire was sanctioned by the UK government last week because of his links to Russian President Vladimir Putin.

Mr Abramovich's assets have been frozen and he has been disqualified as a director of Chelsea Football Club.

The Russian billionaire has already admitted in a UK court that he made corrupt payments to help get the Sibneft deal off the ground.

He was being sued in London by his former business associate Boris Berezovsky in 2012.

Mr Abramovich won the case, but he described in court how the original Sibneft auction was rigged in his favour and how he gave Mr Berezovsky $10m to pay off a Kremlin official.

BBC Panorama has obtained a document that is thought to have been smuggled out of Russia.

The information was given to the programme by a confidential source, who says it was secretly copied from files held on Mr Abramovich by Russian law enforcement agencies.

The BBC cannot verify that, but checks with other sources in Russia have backed up many of the details in the five-page document.

It says: "The Dept. of Economic Crimes investigators came to the conclusion that if Abramovich could be brought to trial he would have faced accusations of fraud… by an organised criminal group."

Panorama tracked down Russia's former chief prosecutor, who investigated the deal in the 1990s.

Yuri Skuratov did not know about the secret document, but he independently confirmed many of the details about the Sibneft sale.

Mr Skuratov told the programme: "Basically, it was a fraudulent scheme, where those who took part in the privatisation formed one criminal group that allowed Abramovich and Berezovsky to trick the government and not pay the money that this company was really worth."

It says law enforcement files on Mr Abramovich were moved to the Kremlin and that an investigation by Mr Skuratov was stopped by the president.

Mr Skuratov was sacked after the release of a sex tape in 1999. He says it was a stitch-up to discredit him and his investigation.

He said: "This whole thing was obviously political, because in my investigations I came very close to the family of Boris Yeltsin, including via this investigation of the Sibneft privatisation."

Mr Abramovich remained in the Kremlin inner circle when Vladimir Putin came to power in 2000.

Mr Abramovich formed a partnership with another firm to buy Slavneft, but a rival Chinese company was planning to bid almost twice as much.

Many powerful people - from the Kremlin to the Russian parliament - would have stood to lose out if the Chinese won the auction.

The document says that a member of the Chinese delegation was kidnapped when they arrived in Moscow for the auction.

"CNPC, Chinese company, a very strong competitor, had to withdraw from the auction after one of its representatives was kidnapped upon arrival at Moscow Airport and was released only after the company declared its withdrawal."

The kidnapping story is backed up by independent sources who did not know about the document.

Vladimir Milov was Russia's deputy energy minister in the run up to the Slavneft sale. He didn't comment on the kidnapping story, but he said senior political figures had already decided that Mr Abramovich's partnership would win the auction.

"I said, look, the Chinese want to come in and they want to pay a much bigger price. They say it doesn't matter, shut up, none of your business. It's already decided. Slavneft goes to Abramovich, the price is agreed. The Chinese will be dragged out somehow."

There is no suggestion that Mr Abramovich knew anything about the kidnapping plot, or played any part in it.

His lawyers told the BBC the kidnap claim "is entirely unsubstantiated" and he has "no knowledge of such incident".

Different factions had been fighting for control of Slavneft and there was widespread opposition to the Chinese bid.

Whatever the reason for the Chinese withdrawal, Mr Abramovich's partnership had the only bid left on the table. And they bought Slavneft at a knockdown price.

Mr Abramovich's lawyers say allegations of corruption in the Slavneft and Sibneft deals are false, and he denies he was protected by Mr Yeltsin.