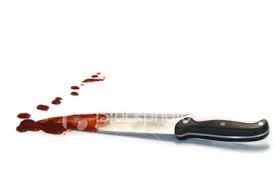 A man stabbed his daughter to death and left two others seriously injured before he attempted to commit suicide in Soy, Uasin Gishu County.

Neighbours said the suspect, who is fighting for his life in hospital, had threatened to kill his wife after quarrelling on Saturday morning, accusing her of having an extra-marital affair.

The woman escaped through the window when he confronted her at night, leaving her three daughters behind. The man turned against them.

He stabbed them severally before driving the knife into his body in a bid to commit suicide. After failing to take his own life, he decided to report his crime to a neighbour.

“He woke up a neighbour and reported he had murdered the children, and that all that remained was collection of bodies. The neighbour visited the house and found one child dead after seven deep stabs,” an elder brother of the suspect told Nation on Sunday.

The villagers rushed the two children to MRS Clinic at Moi Barracks in bid to save their lives. They were referred to Moi Referral Hospital Eldoret because they were in critical conditions. The two are still admitted to the hospital in serious conditions.

A half an hour later, police led by Eldoret West OCPD Ndung’u Wa Ikonya arrived and collected the child’s body and the man, whom the public was threatening to lynch.

The attacker was also taken to Moi Referral Hospital, while the body of his eight-year-old daughter was laid at the hospital’s mortuary.
Mr Ikonya said the man had had differences with his wife in the past but their case had never reached police.

“We arrived few minutes after and confirmed that one of her daughters had died following deep cuts. The culprit is taking his treatment at MTRH but under tight guard,” he said.

Yesterday morning, about seven hours after the incident, the man’s wife who escaped to her parent’s home got the news and came with her brother only to be greeted by villager’s wails and stench of her children’s blood.

The suspect’s brother said the suspect had severally tried to commit suicide and in the latest incident he was rescued by a friend after he attempted to jump into a flooded river.

“It seems the devil had driven him for long. At times he would be heard saying he would someday kill his wife and himself. He also had taken poison about five years ago,” he said.