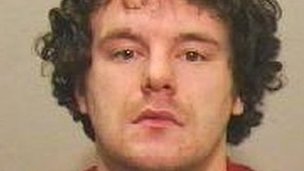 A British man who threatened to kill 200 people in the US, in posts he made under a false name on Facebook, has been jailed for more than two years.

About 3,000 pupils in Warren County missed school the next day as a result.

Elliott, who pleaded guilty at Newcastle Crown Court in April, was jailed for two years and four months.

The father-of-one admitted one count of making a threat to kill and eight of sending grossly offensive messages. He had been held in custody since his arrest.

Elliott targeted a tribute page to 17-year-old Caitlin Talley, a popular pupil at Warren County High, who had died in a car accident in October.

He also posted comments on the tribute site of a 15-year-old girl who cannot be named.

Using a false name, he wrote on the RIP Caitlin Talley page: "My father has three guns. I'm planning on killing him first and putting him in a dumpster.

"Then I'm taking the motor and I'm going in fast. I'm gonna kill hopefully at least 200 before I kill myself. So you want to tell the deputy, I'm on my way."

At his first appearance at South Tyneside Magistrates' Court in February, Gary Buckley, prosecuting, said: "The residents of Warren County and all the people who have access to the Facebook page were clearly concerned.

"I am told that the local authority immediately put all the local schools in the area on what was called lockdown.

"Because of the hysteria caused, around 3,000 children were kept off school on that specific day."

Sentencing Elliott to 28 months in jail, Judge James Goss QC, the Recorder of Newcastle, told him the offences were driven by "no more than self-indulgent nastiness".

He added Elliott's early guilty plea and genuine remorse had been taken into account.

Two months before Elliott posted the threats, 20 children and six adults were shot and killed at Sandy Hook elementary school in Newtown, Connecticut.

After the posts were found to have originated in the UK, the FBI contacted the Metropolitan Police, who in turn worked with Northumbria officers.

Det Ch Insp Ged Noble, who led the investigation on Tyneside, said: "It was established that Elliott did not pose any physical threat to any schools, either here or in America.

"However, his actions were extremely worrying and distressing for the families involved and clearly crossed the line to criminal behaviour.

"Today's sentencing marks the end of what has been a complex investigation. From the outset we have worked very closely with law enforcement agencies in the USA and our Crown Prosecution Service.

"Investigating reports of criminal behaviour on social network sites has its challenges, but we have staff who are trained in navigating these systems and identifying who the offenders are.

"New guidelines on dealing with people who post offensive messages using social media have been released by the Director of Public Prosecutions and we will continue to work closely with the Crown Prosecution Service to take action against those who cross the line from their right to free speech to committing criminal offences."