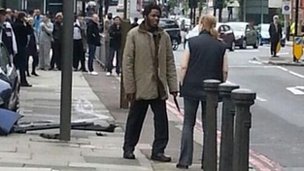 A man has been killed in a machete attack and two suspects shot and wounded by police in Woolwich, south-east London.

The Met Police said a murder inquiry was being led by its Counter Terrorism Command. Prime Minister David Cameron said the UK would "never buckle" in the face of terror attacks.

Police confirmed two men had been arrested in connection with the murder.

There are unconfirmed reports that the dead man was a soldier.

Both French President Francois Hollande and MP Nick Raynsford said the dead man had been a soldier at Woolwich barracks.

The footage shown on the ITV website shows a man, speaking to the camera, saying: "We must fight them as they fight us. An eye for an eye, a tooth for a tooth."

He added: "I apologise that women have had to witness this today, but in our land our women have to see the same. You people will never be safe. Remove your government, they don't care about you.

Both shot men were taken to hospital, one by air ambulance

One of the men is in a serious condition, the other is also being treated for injuries

The Daily Telegraph has spoken to a woman it says was pictured confronting one of the men; cub scout leader Ingrid Loyau-Kennett said she tried to persuade him to hand over his weapons

Mr Cameron, who had been planning to stay in Paris overnight after meeting the French president, has returned to Downing Street

In a joint press conference, Mr Hollande said he wanted to express his solidarity with the UK after the "murder of a British soldier", but Mr Cameron did not confirm the victim had been a serviceman

At a meeting of the government's emergency response committee, Cobra, it was decided to tighten security at Woolwich and other barracks in London

Another Cobra meeting will be held on Thursday morning, chaired by Mr Cameron

Home Secretary Theresa May said she had been briefed by the director general of Security Service MI5, Andrew Parker, and Metropolitan Police Commissioner Bernard Hogan-Howe on the "sickening and barbaric" attack.

Mr Cameron said Britain had faced "these sort of attacks", adding: "We will never buckle in the face of them.

"People across Britain, people in every community, I believe, will utterly condemn this attack."

He expressed sympathy for the victim and his family, saying: "It is the most appalling crime. We are obviously seeking, and the police are urgently seeking, the full facts about this case."

One witness, identified only as James, said two men had attacked another man, aged about 20, who was wearing a T-shirt of military charity Help for Heroes.

"These two guys were crazed. They were just animals. They dragged him from the pavement and dumped his body in the middle of the road and left his body there," he told LBC radio.

He said after the "horrendous" attack, the two men, who were also in their 20s, stood around, waving knives and a gun, and asked people to take pictures of them "as if they wanted to be on TV or something".

"They were oblivious to anything, they were more worried about having their photo taken, running up and down the road," he said.

Witness Graham Wilders told the BBC he had arrived on the scene to find a car crashed into a wall and a man on the ground.

"Two people were lying over him and I thought they were trying to resuscitate him," he said.

But Mr Wilders said he had driven on to park his car, and when he had returned another witness had told him the two men had been stabbing the man on the ground.

Thomas, another witness who contacted the BBC, said: "I got there minutes after it happened because you could hear gunshots from Woolwich High Street.

"Basically two men carried out an axe attack on a young army cadet walking along the street, by the looks of things the police responded and then shot them in front of the public, at the same time I couldn't really tell if the cadet was fatally or not hurt as police were crowded around him."

According to senior Whitehall sources the people carrying out the attack were heard to say: "Allahu Akbar [God is Great]", BBC political editor Nick Robinson reported.

Met Police Commissioner Bernard Hogan-Howe said it was "hard to comprehend the shocking and horrific scenes we have seen this afternoon on a busy street as Londoners went about their day as normal".

He said officers would "work tirelessly to uncover why this occurred and who was responsible".

On Twitter, the Mayor of London Boris Johnson described the attack as a "sickening deluded and unforgivable act of violence".

Buckingham Palace says the Queen is concerned at the news of the attack and is being kept informed.

Help for Heroes said the charity was "appalled to hear that a man, believed to be a serving soldier, has been brutally murdered in Woolwich today".

The Muslim Council of Britain said in a statement: "This is a truly barbaric act that has no basis in Islam and we condemn this unreservedly. Our thoughts are with the victim and his family."

Mr Raynsford, the Woolwich and Greenwich MP, said he had spoken to local police and understood a number of weapons had been seized at the scene including a gun, knives, and a machete.

He said: "Police were called to reports of an assault... where one man was being assaulted by two other men. A number of weapons were reportedly being used in the attack, and this included reports of a firearm.

"On their arrival at the scene they found a man, who was later pronounced dead.

"Two men, who we believe from early reports to have been carrying weapons, were shot by police. They have both been taken to separate London hospitals. They are receiving treatment for their injuries.

"I can understand that this incident will cause community concerns and I would like to reiterate that we are investigating the circumstances."

Meanwhile, the Independent Police Complaints Commission (IPCC) confirmed it had been informed.

David Dixon, a local head teacher, told the BBC News Channel he walked out of the school gates and saw a body lying in the road a short distance away.

He then heard gunshots and instructed staff to lock all the gates of his school.

An air ambulance landed in the playground and the children were sent home.

The Met Police said extra officers would remain on duty in the London borough of Greenwich on Wednesday night.