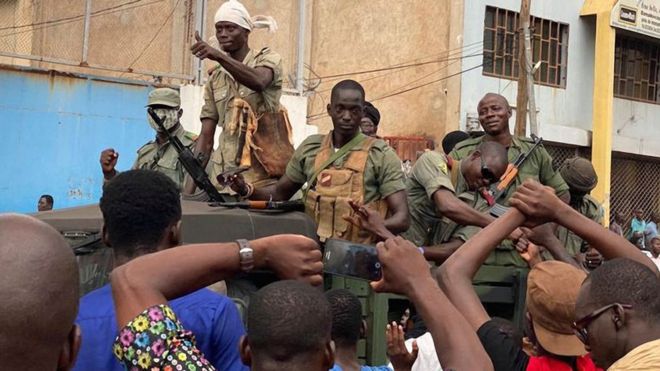 The mutinying soldiers were cheered by crowds as they reached the capital Bamako on Tuesday
30.5k Shares

The soldiers who ousted Mali's President Ibrahim Boubacar Keïta say they plan to set up a civilian transitional government and hold new elections.

The spokesman for the soldiers said they acted to prevent the country falling further into chaos.

President Keïta resigned on Tuesday night saying he did not want "blood to be spilled to keep me in power."

The African Union, regional leaders, and the UN have condemned the coup.

Mali, a vast country stretching into the Sahara Desert is among the poorest countries in the world and has experienced several military takeovers. It is currently battling to contain a wave of jihadist attacks and ethnic violence.

The soldiers, calling themselves the National Committee for the Salvation of the People, said they did not want to stay in power.

"We are keen on the stability of the country, which will allow us to organise general elections to allow Mali to equip itself with strong institutions within the reasonable time limit," said the group's spokesman, Col Ismaël Wagué, the air force deputy chief of staff.

What did Mr Keïta say?
On Tuesday night, wearing a surgical mask amid the coronavirus pandemic, Mr Keïta resigned in a brief address on state television.

"If today, certain elements of our armed forces want this to end through their intervention, do I really have a choice?" he asked.

"I hold no hatred towards anyone, my love of my country does not allow me to," he added. "May God save us."

Mr Keïta won a second term in elections in 2018, but since June he has faced huge street protest over corruption, the mismanagement of the economy and a dispute over legislative elections.

There has also been anger among troops about pay and the conflict with jihadists.

What have the soldiers said?
A televised statement was read out early on Wednesday on behalf of the National Committee for the Salvation of the People.

"Civil society and political social movements are invited to join us to create together the best conditions for a civil political transition leading to credible general elections for the exercise of democracy through a roadmap that will lay the foundations for a new Mali," said Col-Major Wagué.

Flanked by soldiers, Col Wagué said: "Our country is sinking into chaos, anarchy and insecurity mostly due to the fault of the people who are in charge of its destiny."