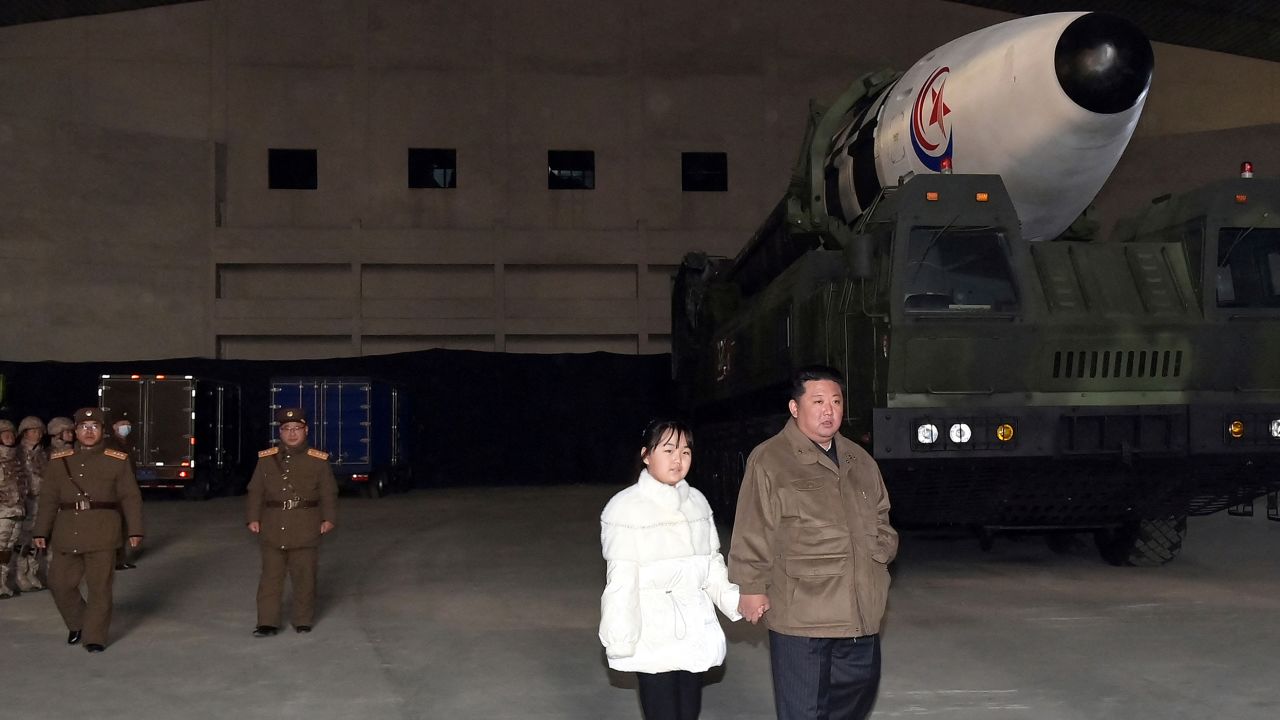 North Korean leader Kim Jong Un oversaw the launch of “a new type” of intercontinental ballistic missile Friday, alongside his young daughter, whose existence had not previously been confirmed.

Striking photographs released by the state-run Korean Central News Agency (KCNA) appear to show Kim hand in hand with the girl, as the ICBM sits on its mobile launch platform nearby.

KCNA claimed that the “new” missile being viewed by the pair was a Hwasong-17, and said that it launched from Pyongyang International Airfield, flying a distance of 999.2 kilometers (621 miles).

Japan warned after the launch on Friday that the new missile appeared to have the potential range to reach the United States mainland.

Kim said the test was intended to “clearly demonstrate” his country’s ability to respond to what he termed the “hysteric aggression war drills by the enemies seeking to destroy peace and stability in the Korean peninsula,” according to the KCNA report. 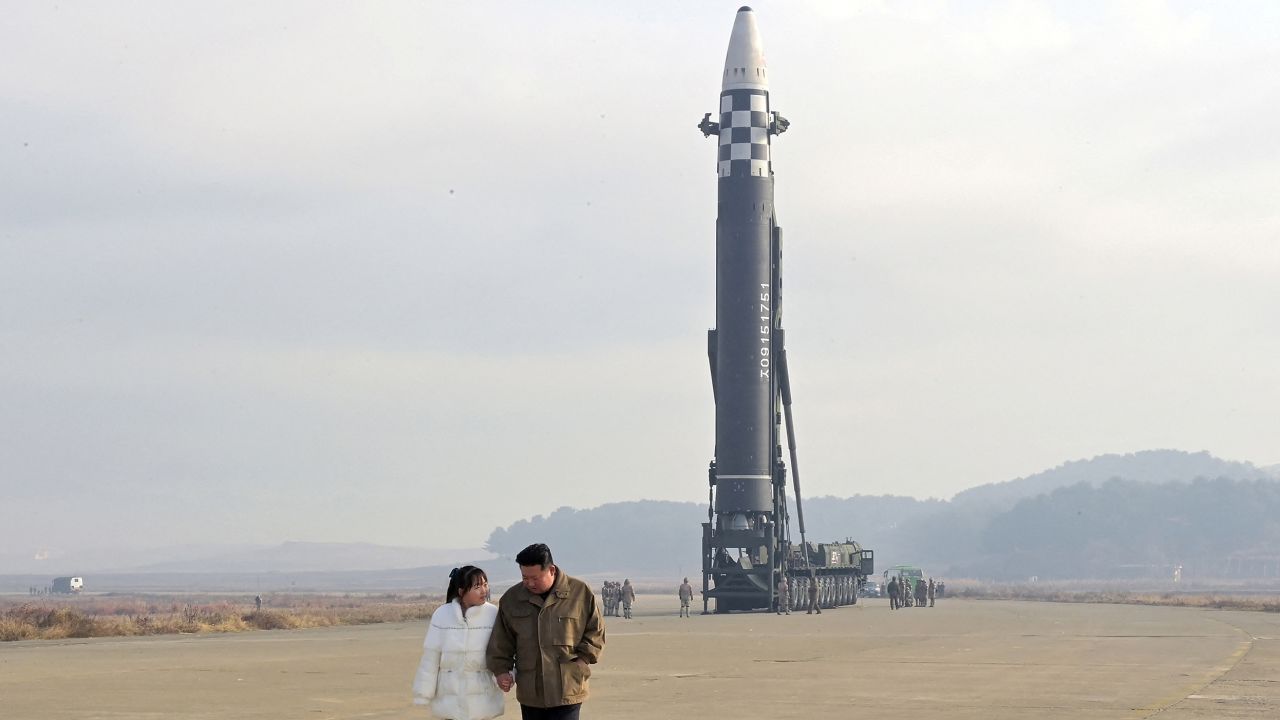 “Kim Jong Un solemnly declared that if the enemies continue to pose threats to the DPRK, frequently introducing nuclear strike means, our Party and government will resolutely react to nukes with nuclear weapons and to total confrontation with all-out confrontation,” KCNA said.

New test, old threats
Friday’s launch, which landed about 210 kilometers (130 miles) west of the Japanese island of Oshima Oshima, according to the Japanese officials, was not the first time North Korea has fired an ICBM that experts and officials have assessed could theoretically reach the US.

Friday’s missile was shorter in altitude and distance compared to Pyongyang’s missile test on March 24, which recorded the highest altitude and longest duration of any North Korean missile ever tested, according to a report from the Korean Central News Agency (KCNA) at the time. That missile reached an altitude of 6,248.5 kilometers (3,905 miles) and flew a distance of 1,090 kilometers (681 miles), KCNA reported.

And in 2017, then-US Defense Secretary James Mattis, said a missile launched by North Korea in that year demonstrated the ability to hit “everything in the world.”

Despite the missile’s theoretical range, Pyongyang’s ability to put a nuclear warhead atop it and deliver it on target remains unproven.

Ballistic missiles are fired into space before plunging back down to Earth. Experts have yet to see conclusive proof that North Korea can get a warhead to successfully the fiery reentry to Earth’s atmosphere.

Kim’s threats to the US and South Korea were also nothing new.

After a missile test in October, the North Korean leader warned adversaries his nuclear forces are fully prepared for “actual war.”

“Our nuclear combat forces … proved again their full preparedness for actual war to bring the enemies under their control,” Kim said in a KCNA report.

US basketball star first mentioned Kim’s daughter
Very little is known about the private life of Kim Jong Un or his family.

Saturday’s news report did not name Kim’s daughter, who was appearing for the first time in state media. But in 2013, former basketball star Dennis Rodman told Britain’s the Guardian newspaper that Kim had a “baby” called “Ju Ae.”

Rodman said he spent time with the family, describing Kim as a “a good dad” and that he spoke to Kim’s wife, Ri Sol Ju.

“I held their baby Ju Ae and spoke with Ms. Ri as well,” he told the newspaper. 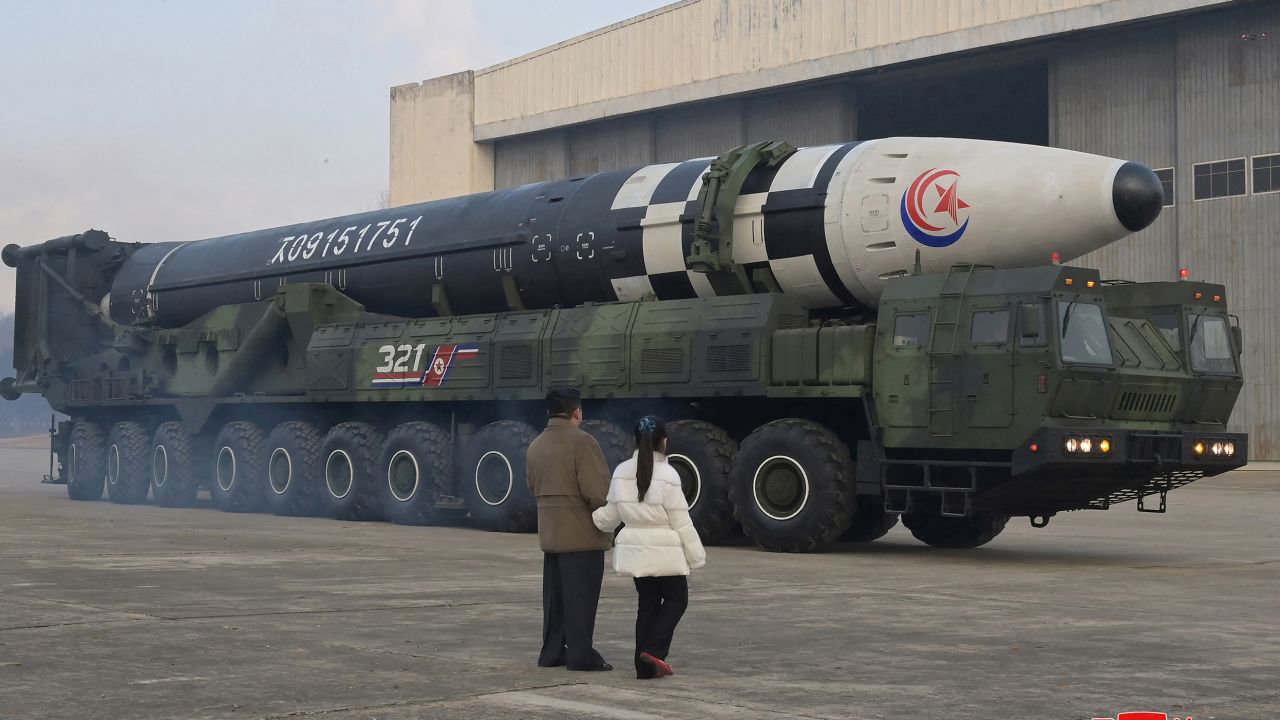 Speculation sprang up in 2012 that Ri might be pregnant after a photo carried by state media showed her wearing a long coat that could have been hiding a bump. But North Korean authorities kept quiet about the matter.

State media did not announce Kim and Ri’s marriage until July 2012, some three years after South Korean intelligence believe the wedding took place.

But that changed in 2018, when she was afforded the new title of “respected First Lady” by North Korean state media, a step up from the previously used “comrade” and a sign, according to analysts, that she was gaining her own personality cult.

Kim and Ri have three children together, according to South Korea’s National Intelligence Service (NIS).

North Korea has been ruled as a hereditary dictatorship since its founding in 1948 by Kim Il Sung. His son, Kim Jong Il, took over after his father’s death in 1994. And Kim Jong Un took power 17 years later when Kim Jong Il died