Kenya: 13 dead after rushing to fetch fuel from overturned tanker 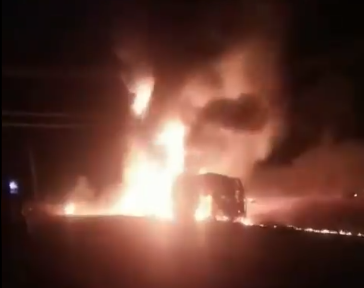 At least 13 people have died after a petrol tanker overturned and caught fire in western Kenya on Sunday night.

The crash reportedly happened as the driver tried to avoid a head-on collision with another lorry on the busy road between Kisumu and Busia.

People rushed to the scene with jerrycans to siphon off the fuel from the overturned tanker when it exploded.

Around 11 people, including children, are in hospital in critical condition after suffering severe burns.

It took two hours for firefighters to reach the scene, near the town of Malanga in Siaya County - about 315km (195 miles) northwest of the capital, Nairobi.

"We could not get a fire engine from Siaya County since it is in Nairobi," local police chief Moreso Chacha said.

Fire crews came from a neighbouring county to help, he said.

A lorry carrying milk was travelling from Busia, near the Ugandan border, to Kisumu when it collided with the petrol tanker going in the opposite direction, the police commander explained.

Road accidents are not unusual in the East Africa nation, where lorries and other vehicles often speed along single carriage highways - some unlit at night, says the BBC's Mercy Juma in Nairobi.

About 3,000 people die in road collisions in Kenya each year.