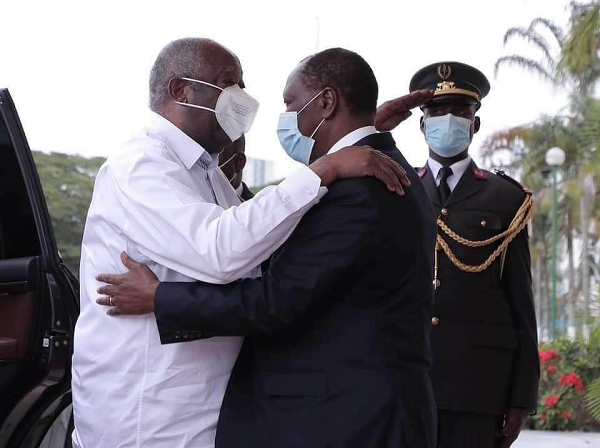 Ivory Coast President Alassane Ouattara and bitter rival Laurent Gbagbo have embraced in their first meeting since the civil war 10 years ago.

The conflict was sparked by Mr Gbagbo's refusal to admit defeat in an election, and 3,000 people were killed.

Mr Gbagbo returned to Ivory Coast last month after the International Criminal Court (ICC) acquitted him over charges of crimes against humanity.

Both men have been pushing for peace and reconciliation.

Mr Ouattara welcomed Mr Gbagbo into the presidential palace in the capital Abidjan on Tuesday.

"I am happy to see you," the president told Mr Gbagbo.

Images from the meeting show the pair smiling and holding hands while posing for photographs.

Speaking at a news conference after their meeting, Mr Ouattara said the turmoil was behind them.

"What is important for Ivory Coast is peace in our country," he added.

Mr Gbagbo called for the release of prisoners held since the civil war.

Some see the meeting as a sign of the nation healing but Mr Gbagbo's spokesman Justin Katinan Kone told people "not to make too much" of the encounter.

Mr Gbagbo was captured at the presidential palace in April 2011 and transferred to the ICC at The Hague. After his acquittal, he lived in the Belgian capital Brussels before being invited to return to Ivory Coast by Mr Ouattara.

Mr Gbagbo returned last month and was welcomed by supporters.

He still faces a 20-year prison sentence after he was convicted in absentia of looting a regional bank during the civil war.

Mr Gbagbo recently announced that he and another former president - Henri Konan Bédié - were strengthening a political alliance to oppose President Ouattara.