How are Taiwanese dealing with China's military threat? 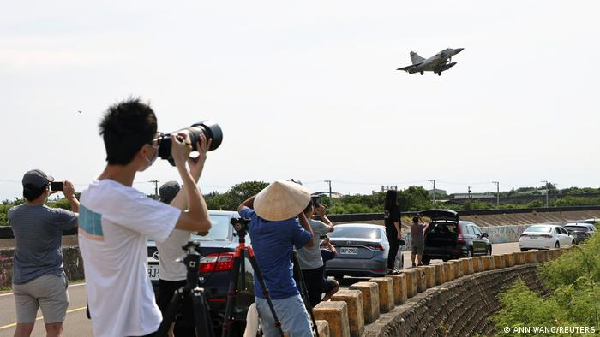 Despite China's large-scale military exercises around Taiwan, life across the island largely remains the same. The relative calmness is in stark contrast to how the international community views the situation.

As China's large-scale military exercises encircling Taiwan enter the sixth day, the world is anxiously assessing how the latest aggression from Beijing might change the security environment in the region.

In Taiwan, however, many people remain largely calm in the face of what many political analysts describe as an escalated threat level for the self-governed democratic island.

"I think many Taiwanese people, including myself, are vigilantly following China's military exercises around Taiwan, but we have a measurement in our mind regarding how much threat this is towards Taiwan," said Jeremy Chiang, a young professional working in the tech industry.

"We will view most of the military moves as acts of intimidation until the PLA's actions reach the brink. But when certain indicators emerge, it will trigger more reactions from Taiwan's civil society," he added, referring to China's People's Liberation Army.

Despite news of Chinese missiles reportedly flying over Taiwan and Chinese military vessels repeatedly crossing the median line — an unofficial demarcation between China and Taiwan that the former does not recognize — life across the island has largely remained the same since the Chinese military began its drills.

The relative calmness across the territory is a huge contrast to how the international community views the unfolding event.

"My friends in Germany were very worried about my situation because, from the news they read, it looked like China had completely encircled Taiwan," said Winifred Yu, a professor teaching German language and literature at the National Kaohsiung University of Science and Technology in Southern Taiwan.

While some say the calmness comes from decades of experience living under the looming threat from China, others say the event this time still feels slightly different from the last Taiwan Strait Crisis in 1996, when Beijing conducted a series of missile launches around Taiwan.

"I remember the news of President Lee Teng-hui visiting Cornell, all the threats, the military exercises on the news. I also remember the fear — a significant number of my friends from childhood emigrating abroad," said Albert Wu, a Taiwanese historian at Academia Sinica in Taiwan.

"The current situation does feel a bit different, probably because I'm older and am more inured to Chinese saber-rattling. We were glued to Twitter during the Pelosi visit and subsequent exercises, and it's hard not to see the pictures of the blockade and envision the fact of a Chinese invasion," he underlined.

"But once I'm off Twitter and stop watching the news, I feel a lot better — seeing people do their morning exercises, going to the grocery store, attending academic talks, going about their daily lives."

On Tuesday, Taiwan's Foreign Minister Joseph Wu slammed Beijing for staging a serious provocation with its military exercises around the island.

"China's decision to carry out military exercises in areas surrounding Taiwan is a gross violation of Taiwan's rights under international law, particularly in the way it designated the zones for its exercises," he said at a press conference.

He also reiterated that Taiwan and its people have "displayed resilience and confidence" while remaining calm in the face of the PLA's aggression. "China's continued attempts to intimidate Taiwan will not panic us, nor will they defeat us. Taiwan will continue to staunchly uphold its free and democratic way of life," the minister added.

Some Taiwanese have changed their views
Albert Wu said he was impressed by the Taiwanese government's handling of the situation, especially the government's strategies to communicate with the public. "I think what the Ukraine war has made clear is that contemporary warfare is as much about information and rallying public sentiment as it is about actual military capacity," he said, pointing to President Tsai's activitiy on the regional social media platform LINE.

"Her account and her messaging have been calm and reassuring. The Ministry of National Defense Twitter account has been consistent at putting out factual information. I think this type of transparency bodes well for the future," he added.

While many Taiwanese stress they are not overly concerned about the rising military threat from Beijing, some say the ongoing drills have changed their views on the possibility of a Chinese invasion of the island.

"I used to not believe that China would launch a military invasion against Taiwan, but now I wonder where the future for Taiwan's next generation is," said Andrea Yang, a marketing professional in her 40s. "China's behavior seems to show that they are no longer afraid of the United States."

Yang and other Taiwanese DW spoke to for this article say that one important indicator of whether China will militarily invade Taiwan or not is whether other countries are starting to evacuate their citizens.

They explain that if countries friendly to Taiwan were to start evacuating their citizens, it would have more of an impact on the Taiwanese people's morale.

Preparing a contingency plan?
Yang said she hasn't started thinking about the possibility of leaving Taiwan yet, but if she gets a chance in the future, she stressed she will consider emigrating to other places.

However, not all Taiwan residents are thinking of a contingency plan. Michelle Kuo, a Taiwanese American academic and writer who moved to Taipei with her family last year, said her family hasn't considered a contingency, yet.

"I think I'm afraid to do so — because it means having to deal with the privilege to leave. I don't want to be a person who leaves. I want to be a person who stays, who helps, who is there for others," she said, adding that their elderly family members and her two-year-old daughter in Taiwan make it hard to imagine leaving Taiwan.

"Having the choice to leave is obviously a profound privilege, and the American passport equips one to leave. I'm constantly aware of this power disparity and for that reason, I try my best to defer to the local attitudes. If they're not panicked, I'm not either," she said.

With China extending the military exercises, most Taiwanese believe it's important for them to focus on maintaining their daily routine. "What else is there to do but carry on? There's not much we can do other than to stay informed, start preparing for the worst, but to stay calm in the meantime," Albert Wu said.