What you need to know about Texas, Ohio shootings 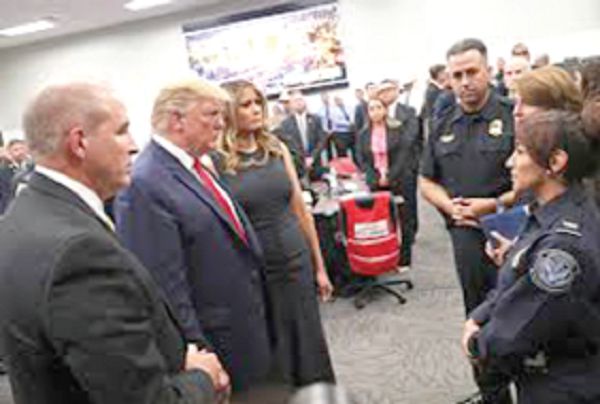 About 31 people have died in two separate and cruel mass killings in El Paso, Texas and Dayton, Ohio, in the United States of America (USA), just about a week ago.

Of the number, 22 were killed in the Walmart shooting in El Paso, while about two dozens more were wounded last Saturday, August 3, 2019.

In less than a day later, another mass shooting took place in the Oregon District of Dayton, Ohio, which left another nine dead and at least 27 wounded on the morning of Sunday, August 4, 2019.

The suspected gunman in the El Paso killing, mentioned as 21-year-old Patrick Crusius, has since been charged with capital murder.

The motive is said to be possibly hate crime and the Justice Department is also "seriously considering" bringing federal hate crime and federal firearm charges, which carry a possible death penalty,” US Attorney John Bash said during a news conference.

In the Dayton shooting, nine people were killed and the suspect in that shooting is also dead.

At a news conference, Dayton Police Chief Richard Biehl said the gunman had "expressed the desire to commit a mass shooting."

The FBI said the gunman was "exploring violent ideologies," but added that it had not made a final determination on his motive.

A twitter account that appeared to belong to the Dayton mass shooter Connor Betts retweeted extreme left-wing and anti-police posts, as well as tweets supporting Antifa, or anti-fascist, protesters.

Available data indicate that Texas became the 28th state of the United States of America (USA) in 1845.

The data suggests that it occupies the south-central segment of the country and is the largest state in area, except for Alaska.

The Sabine River forms most of the boundary with Louisiana to the east, where by land it is bordered by Arkansas as well.

Austin, in the south-central part of the state, is the capital.

Although Texans still identify strongly with their cowboy heritage, the state’s image of Texas changed dramatically over the course of the 20th century.

Dayton is the sixth-largest city in the state of Ohio and the county seat of Montgomery County.

A small part of the city extends into Greene County.

Dayton is the fourth-largest metropolitan area in Ohio and the 63rd in the United States.

It is within Ohio's Miami Valley region, just north of Greater Cincinnati.

Ohio's borders are within 500 miles (800 km) of roughly 60 per cent of the country's population and manufacturing infrastructure, making the Dayton area a logistical centroid for manufacturers, suppliers and shippers

Dayton hosts significant research and development in fields such as industrial, aeronautical and astronautical engineering that have led to many technological innovations.

Much of this innovation is due in part to Wright-Patterson Air Force Base and its place in the community.

With the decline in heavy manufacturing, Dayton's businesses have diversified into a service economy that includes insurance and legal sectors, as well as healthcare and government sectors.

While the people of the affected states, relatives and authorities in the USA mourn the dead and pray for the quick healing of the wounded, calls are also being made for stricter measures to control the sale and possession of firearms.

Currently in Texas, there aren’t any laws banning the possession or the purchase of weapons such as the AK-47 the shooter used to kill 22 people and injured dozens more.

In 2015, Governor Greg Abbott signed legislation allowing Texans with licences to openly carry their handguns, as long as those weapons are in a hip or shoulder holster.

And during the last legislative session, lawmakers expanded the bandwidth of some gun laws.

One new law will allow handgun owners to carry concealed firearms without a licence in the case of a disaster evacuation.

Another removes the cap on how many school marshals could carry guns on public school campuses.

But other lawmakers are calling for tighter gun control in the state, including State Republican Roland Gutierrez D-San Antonio, who sent a letter to Governor Greg Abbott requesting an emergency special session to address gun violence.

According to Texas Tribune, under Texas law, most types of weapons could be purchased and possessed with few exceptions. Texas law, mirroring federal regulations, prohibits certain groups of people from purchasing or possessing firearms, including felons and people convicted of domestic violence misdemeanors.

Over the years, the number of Texans with a licence to carry guns has surged. In 2000, there were roughly 215,000 active licences in the state.

By 2018, that number had swelled to well over a million, according to data from the Texas Department of Public Safety.

Meanwhile, it is reported that a dozen firearms bills are pending in the Ohio General Assembly, which are split equally between expanding gun rights and restricting them, according to the Buckeye Firearms Association, a pro-gun group.

One bill calls for allowing people to carry concealed weapons without permits, background checks or training.

Governor Mike DeWine, who was endorsed by the National Rifle Association in the 2018 governor's race, has said he supports a "Red Flag Law" for Ohio.

Also known as extreme protection orders, red flag laws allow police or close family members to get a court order to remove firearms from someone who appears to be a danger to themselves or others.

Ohioans for Gun Safety is currently collecting signatures for a proposed law that would mandate background checks on nearly all gun sales, including those between private parties.

A database recording on schools shootings suggests that 2018 recorded the highest number of attacks ever recorded in figures since 1970.

This has led to people questioning the type of control and flexibility that exist and have called for the debate to either resume or be intensified to ensure that children, parents, workers, officials and people in general receive the best of protection and are able to go about their day-to-day activities without entertaining any fears.

According to foreign media, the families also believe that such steps will put a stop to the situation where family members leave home to undertake one transaction or the other and never return home.

They say it is difficult to describe the anxiety and pain they go through when their members go missing, or when they do not hear from them for hours or days.

Meanwhile, President Donald Trump and First Lady Malania have visited those in hospitals in both Texas and Ohio.

Some residents interviewed said gun violence was not about the guns but the persons who owned or used the arms.