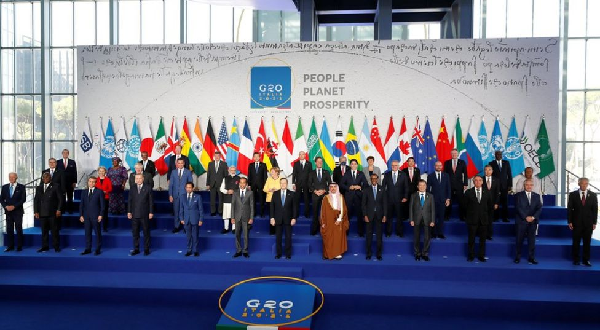 The leaders are meeting in Rome for two days

Climate change and Covid are top of the agenda of leaders from the world's major economies meeting in Italy.

It is the first time the G20 leaders are meeting face-to-face since the start of the pandemic.

However, China's Xi Jinping and Russia's Vladimir Putin are not in Rome for the summit, choosing to appear via video link instead.

The talks come amid increasingly dire warnings for the future if urgent action is not taken to cut emissions.

The G20 group - made up of 19 countries and the European Union - is estimated to account for 80% of the world's carbon dioxide emissions.

However, he acknowledged that neither the G20 meeting, nor the COP26 summit in Glasgow which begins on Monday, would halt global warming, but could, if the right measures were taken, "restrict the growth in the temperature of the planet".

According to Reuters news agency, a draft communiqué outlines a promise from the G20 to work towards limiting the rise in temperatures to 1.5C (2.7F), saying it "will require meaningful and effective actions by all countries".

The draft also notes the need for "developed countries to mobilise $100bn (£73bn) annually from public and private sources through to 2025 to address the needs of developing countries" so they can tackle climate change - a promise richer countries have failed to keep since 2009, when it was initially pledged.

What else is on the agenda?
COVID: Vaccine equality is at the front and centre of many leaders' minds. Italian Prime Minister Mario Draghi said the fact just 3% of the more than six billion Covid vaccine doses administered worldwide had gone to the poorest countries was "morally unacceptable".

He called on fellow leaders to "do all we can" to vaccinate 70% of the world's population by the middle of next year.

TAX: The group is also expected to endorse a global minimum corporate tax rate of at least 15%, which is backed by 140 countries around the world.

The draft communiqué calls for it to be in place some time in 2023. It is understood there is "broad" agreement on the plan from the countries in attendance.

IRAN: US President Joe Biden is due to hold meetings with Mr Johnson, as well as France's Emmanuel Macron and Germany's outgoing Chancellor Angela Merkel, to discuss reviving the Iran nuclear accord. Talks with Tehran are due to restart next month.