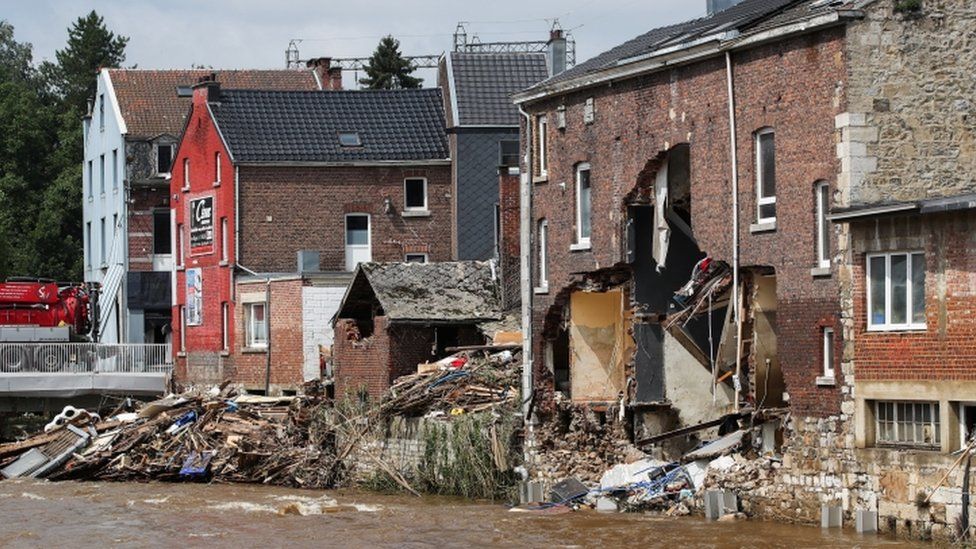 Residents in regions of Germany and Belgium worst-affected by recent floods have begun the huge task of clearing their neighbourhoods, as the waters begin to recede.

The scale of the damage is becoming clear, as rescue crews continue to look for victims.

At least 180 people have died, and with many still missing the death toll could rise further.

Flooding continued to wreak havoc in parts of Europe on Saturday.

Emergency crews rescued people from homes in the Austrian region of Salzburg, where floodwaters submerged the streets of one town.

In western Germany authorities said the Steinbachtal dam remained at risk of breaching after residents were evacuated from homes downstream.

European leaders have blamed climate change for the floods, which have also affected Switzerland, Luxembourg and the Netherlands.

At least 156 people are now known to have died in the floods in Germany, including four firefighters.

The states of North Rhine-Westphalia, Rhineland-Palatinate and Saarland have been the worst affected.

Thousands of people were reported missing during the height of the floods, but many have since been accounted for.

In the spa town of Bad Neuenahr in Rhineland-Palatinate's Ahrweiler district, residents were determined to begin the clean-up operation, scraping mud from the streets and clearing piles of debris.

But the task is huge, with many businesses and livelihoods in the town swept away, electricity and gas still cut off and communication lines destroyed.

Baker Gregor Degen told AFP news agency he had gathered a group of neighbours to start clearing away mud and debris.

He had been ready to go to work the day after the floods but water levels were too high, he said. More than 110 people have been killed and 670 injured in Ahrweiler, police say.

In North Rhine-Westphalia emergency workers have begun removing abandoned cars from the flood-hit B265 road.

Fire service spokesman Elmar Mettke said the cars had been checked for bodies while still submerged.

Meanwhile a senior German politician has been criticised for laughing during a visit to affected areas.

Armin Laschet, who is the conservative candidate to replace outgoing Chancellor Angela Merkel, was caught on camera apparently joking with colleagues as President Frank-Walter Steinmeier was expressing sympathy to victims.

Mr Laschet later tweeted (in German) that he regretted his behaviour, but commentators and politicians were quick to condemn him.

"Laschet laughs while the country cries," Bild newspaper said on its website.

Mrs Merkel herself is expected to visit the village of Schuld, described by one resident as a "war zone", on Sunday.

In Belgium, the army has been sent to four of the country's 10 provinces to help with rescue and evacuations. Prime Minister Alexander De Croo declared 20 July a national day of mourning.

He said the floods - which have claimed at least 27 lives in Belgium - could be "the most catastrophic our country has ever seen".

Rescue workers from France, Italy and Austria were sent to the city of Liege, where residents were evacuated after flash floods.

Meanwhile in the Netherlands, thousands of people fled their homes in Limburg province as rising waters swamped cities and broke through a dyke.

But waters were receding in the southern city of Maastricht and nearby towns, where residents were able to return to their homes on Friday.