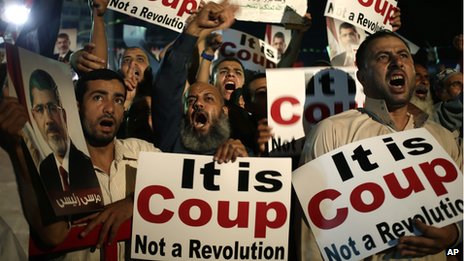 US senators John McCain and Lindsey Graham have joined top diplomats in Cairo to help find a peaceful solution to Egypt's political stalemate.

Egypt has been in crisis since the army ousted leader Mohammed Morsi on 3 July.

Mr Morsi, a Brotherhood member, has been formally remanded in custody at an undisclosed location, according to a judicial order.

Thousands are taking part in protests in Cairo demanding that the deposed president be reinstated.

There has been mounting tension over plans to break up the two mass sit-ins by Morsi loyalists outside the Rabaa al-Adawiya mosque in the suburb of Nasr City, and in Nahda Square, near the campus of Cairo University in Giza.

More than 100 Morsi supporters have been killed in clashes with security forces. At least 80 died in a single incident near Rabaa al-Adawiya on 27 July. 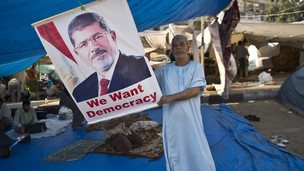 Mr McCain and Mr Graham arrived in the Egyptian capital on Monday evening for two days of negotiations.

Both senators have made several trips to Egypt since the country's revolution in 2011.

Before heading to Cairo, Senator Graham warned that the Egyptian military must back out of politics quickly or risk a cut of the $1.3bn (£860m) in aid that it receives from the US each year.

In the meantime the Muslim Brotherhood also navigates a difficult path, the BBC's Caroline Wyatt, in Cairo, reports.

Ending the sit-ins could alienate its own grassroots supporters, our correspondent says, while continuing the protests might further alienate the Egyptian public and increase the prospects of a violent end to the demonstrations.

The US state department said a delegation led by Mr Burns had visited Mr Shater to "prevent further violence, calm tensions and facilitate an inclusive dialogue to help the transition to a democratically elected civilian government".

However, Mr Shater cut the visit short, saying they should instead meet Mohammed Morsi.

According to Brotherhood spokesman Gehad al-Haddad, Mr Shater told the US delegation that he was in "no position to speak" and that they should direct their questions to Mr Morsi.

He told the diplomats that Mr Morsi held the key to solving the crisis and that there was no alternative to constitutional legitimacy, according to statements on Mr Haddad's Twitter feed.

Separately, Mr Haddad told Reuters news agency that the Brotherhood had rejected the diplomats' pleas to "swallow the reality" that Mohammed Morsi would not return as Egypt's president.

There had been reports that the new interim government was prepared to release leaders of the Muslim Brotherhood from custody and offer the group ministerial positions if they called an end to the sit-ins, correspondents say.

However, a presidential adviser denied such an offer had been made - and Mr Morsi's supporters repeated that they would accept nothing short of his reinstatement.

The foreign ministers of Qatar and the United Arab Emirates are also involved in the diplomatic push.

Over the weekend, the government reiterated its call for Morsi supporters to end their sit-ins peacefully.

A government helicopter dropped leaflets over the Rabaa al-Adawiya demonstration which pledged that protesters would face no action if they had not committed a crime.

The army removed Mr Morsi following huge protests against him. The new government has outlined its own roadmap leading to fresh elections in 2014.