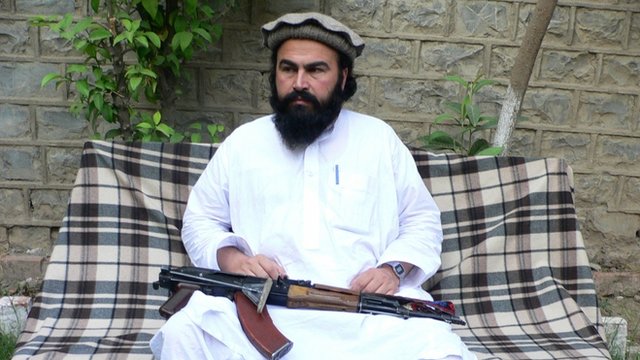 Earlier, Pakistani security officials said a local Taliban commander was among casualties in the raid.

Missiles hit a house close to the town of Miranshah, in north-west Pakistan, early on Wednesday.

The strike is the first for almost six weeks.

It comes a week after President Barack Obama issued new guidelines for tighter scrutiny of the US drone programme and stricter targeting rules.

A senior Taliban source in Miranshah told the BBC that one of those killed in the drone strike was Waliur Rehman, the No. 2 commander of the Pakistani Taliban.

The US government had placed a $5m (£3.3m) bounty on his head, accusing him of involvement in attacks on coalition forces in Afghanistan. These included the 2009 bombing of a US base in which seven CIA agents were killed.

The BBC's Orla Guerin in Islamabad says that if the death is confirmed, Washington will see this as a considerable victory.

However our correspondent notes that confirming who has been killed by a drone strike can take days or weeks because the strikes happen in remote areas that are often under militant control.

On at least two occasions, Waliur Rehman is reported to have been killed in previous strikes.

Drone attacks are a major point of contention in Pakistan, and were a key issue in its recent elections.

A Pakistani foreign ministry official condemned the strike as a breach of sovereignty. "Any drone strike is against the territorial integrity and sovereignty of Pakistan," the official, who declined to be identified, told Reuters news agency.

Nawaz Sharif, leader of the Pakistan Muslim League, is about to form a government following elections earlier this month.

Local residents told the BBC that a compound was hit on Wednesday morning about 3km (1.8 miles) east of Miranshah, the administrative centre of the North Waziristan tribal region.

They said it was being used by Pakistan Taliban fighters from neighbouring South Waziristan region who moved their bases to the area in 2009 to escape a military operation.

Pakistan initially offered covert support for drone strikes but has over the years become more defiant, saying such strikes are "counter-productive" and a "violation of sovereignty".

The BBC's M Ilyas Khan in Islamabad says that any strike against the Pakistan Taliban would be welcomed by Pakistani officials because the group has for several years been exclusively focused on pursuing Pakistani - rather than Afghan - military and civilian targets.

The strike is the first since Pakistan's 11 May elections which have brought to the fore groups that oppose such attacks and are seen as feeding on anti-Americanism.

Our correspondent says the strike is seen as an early message from Washington that legitimate targets in Pakistan's tribal regions will continue to be targeted by drones unless Pakistanis themselves are able to neutralise those targets or dismantle militant sanctuaries in them.

Last Friday President Obama defended the use of drones as a "just war" of self-defence against militants and a campaign that had made America safer.

He said there must be "near certainty" that no civilians would die in such strikes. Drone attacks should only be used amid a "continuing, imminent threat" to the US where no other options are available, the guidelines say.

The Afghan-Pakistan border region is home to a variety of local and Afghan militant groups including fighters linked to al-Qaeda.

Pakistan's security forces have long been accused by the US on not doing enough to fight the Taliban in the mountains of North Waziristan.