Dressing down at G8 Summmit 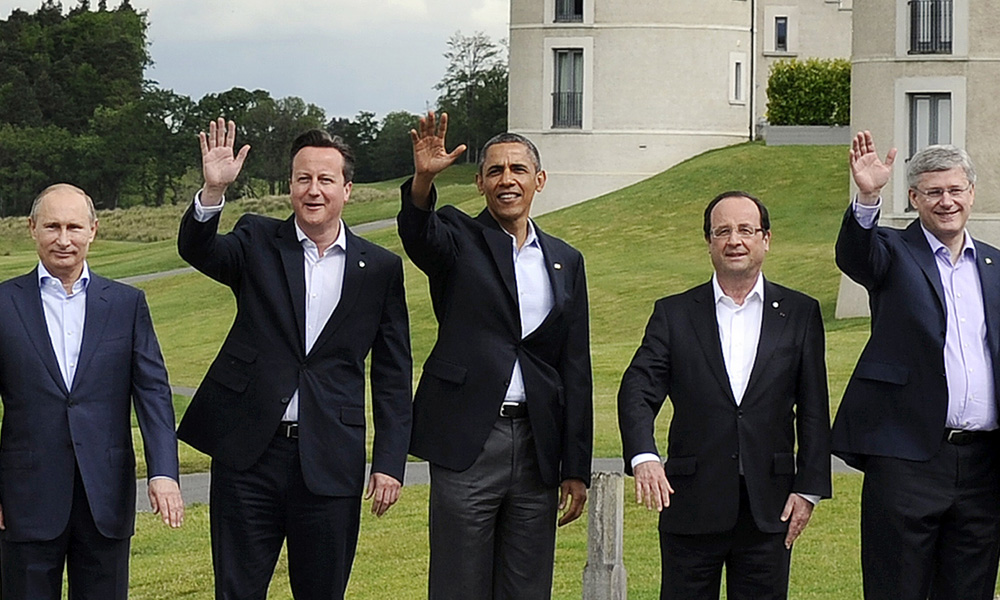 There is a lot of serious chatter going on at the G8 summit in Northern Ireland and Tuesday's discussions are likely to focus on the three Ts - tax, trade and transparency.

But what about that other T?

Ties, or rather the lack of them.

Cameron, Obama, Putin, every leader in fact. All tieless, striding along and shaking hands by the shores of Lough Erne.

They certainly did not forget to pack them and no doubt David Cameron had received a half-decent tie for Father's Day on Sunday.

By going open-necked, they seem to be trying to send the message that they are getting down to business and doing so in a matey-like manner.

UK Chancellor George Osborne told the BBC he had been told to "turn up in smart-casual wear".

"I have followed to the letter: I got out my jacket and my blue shirt," he said.

Many people might say the forced informality makes for uncomfortable viewing. A man in a dark suit and white shirt with no tie does not inherently look relaxed and informal. He just looks like a man who forgot his tie because he overslept.

Cultural commentator Peter York says the leaders have fallen foul of the "middle-aged modern convention" of not wearing ties.

"They look like middle management who are on an away day and about to go paintballing."

But if the leaders of the free world are ditching ties, why does anyone else bother?

They are still de rigueur in the City, golf and gentleman's clubs, and in many schools.

They are brought out for formal occasions such as funerals and court appearances. And in workplaces where ties are not commonplace, nothing says job interview quite like a suddenly materialising suit and tie. "Oh, so you do own one."

They may just be strips of fabric but they have come to symbolise tidiness, respect and professionalism.

Presenter Jeremy Paxman caused a small storm last year when he did not sport a tie on Newsnight. He had previously described the tie as an "utterly useless part of the male wardrobe".

"It seems to me, the only people who wear the things daily are male politicians, the male reporters who interview them - and dodgy estate agents," he wrote.

But ties have stood the test of time - they are one of the few fashion accessories to have survived nearly many decades of social change.

And while the etiquette may have changed, York says they are here to stay.

He says the "studied informality" of open necks is a 90s development and coincided with a time of prosperity.

"When being nicely turned out become more commonplace and affordable, the leisure class stopped doing it," he said.

When asked which leader looked the best without a tie, there was no contest.

"Definitely Obama. He looked miles better and his was a well-thought out style."