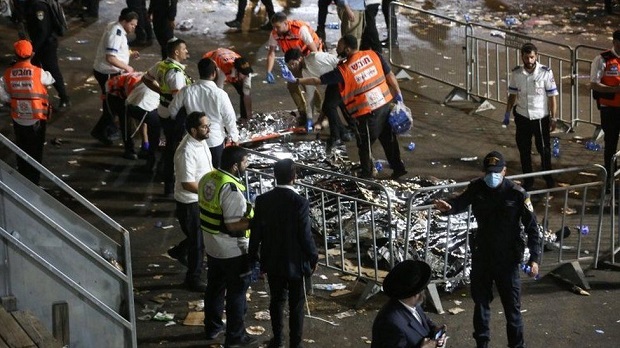 Thousands of people had struggled to flee the chaos through a narrow passageway
30.5k Shares

At least 44 people have been killed in a crush at a crowded religious festival in the north-east of Israel.

Dozens more were injured at the Lag B'Omer festival, which takes place annually at the foot of Mount Meron.

Prime Minister Benjamin Netanyahu described it as a "heavy disaster" and said he was praying for the casualties.

Tens of thousands of Orthodox Jews attended the festival, making it the largest event in Israel since the coronavirus pandemic began.

The country's successful vaccination programme has allowed it to lift many restrictions, but health officials had still warned of the risk of Covid-19 prior to the event.

Early reports suggested a structure at the site had collapsed, but emergency officials later said a crush had occurred at around 01:00 local time (22:00 GMT Thursday).

Police sources told Haaretz that it started after some attendees slipped on steps, which caused dozens more to fall.

"It happened in a split second; people just fell, trampling each other. It was a disaster," one witness told the newspaper.

Videos posted online show thousands of people struggling to flee the chaos through a narrow passageway as the incident unfolded.

One pilgrim said he thought there was a bomb alert when loudhailer messages urged the crowds to disperse. Police then asked everyone at the site to evacuate.

Dozens of ambulances attended the scene and emergency services laid out bodies under foil covers on the ground. Helicopters took the injured to hospital, while the military said search-and-rescue troops were also sent to the site.

At least 103 people were injured, officials said, including 38 people who were in critical condition at the site.

"MDA is fighting for the lives of dozens wounded, and will not give up until the last victim is evacuated," a tweet from the national emergency service Magen David Adom (MDA) said.

"It was crowded and there [was]... no place to move, and people started to fall on the ground, they fell a lot on the ground," one attendee told the BBC.

"Over 1,000 people together tried to go down a very, very small place, very narrow road and they just fell on top of each other," Yanki Farber, a reporter with the Orthodox Jewish website, Behadrei Haredim, said.

Earlier in the day, officials said they were not able to enforce coronavirus restrictions at the site due to the huge crowds.

Police reportedly said they had arrested two people for disrupting their efforts to keep order before the stampede occurred.

What is the Lag B'Omer festival?
Tens of thousands of Orthodox Jews make a pilgrimage to Meron each year for Lag B'Omer, an annual religious holiday marked with all-night bonfires, prayer and dancing.

The town is the site of the tomb of Rabbi Shimon Bar Yochai, a revered second-century sage, who ordained that the anniversary of his death be commemorated with a rejoicing of his life.

According to the Times of Israel, organisers estimated that 100,000 people arrived on Thursday night, with more due to arrive on Friday.