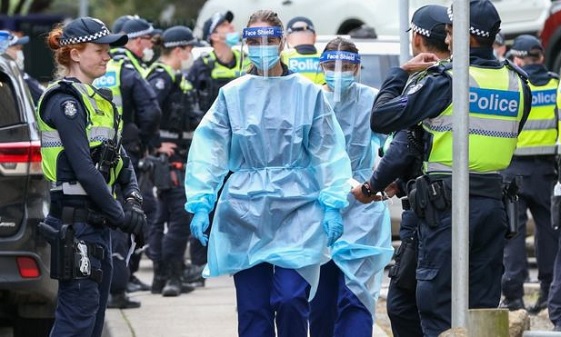 Authorities have launched a massive response to the virus outbreak in Melbourne
30.5k Shares

The border between Australia's two most populous states, Victoria and New South Wales (NSW) is to close after a spike in Covid-19 cases in Melbourne.

The outbreak in Victoria's capital has seen hundreds of cases in the past two weeks - more than 95% of new Australian infections.

Until now, the two states had maintained open borders even when others had shut them.

The closure, beginning on Wednesday, will restrict travel to permit holders.

"This is one of those precautionary measures - it is one of those things that I think will help us in broader terms contain the spread of the virus," Mr Andrews told reporters on Monday.

He gave no indication of when the border might re-open. Flying between Sydney and Melbourne - the state capitals - is ordinarily among the world's busiest routes.

The three leaders had previously said border closures weren't necessary, but the surge in locally spread cases has caused alarm.

Previously, most cases had involved returning overseas travellers in quarantine - now over 80% are coming from within the community.

"This is unprecedented in Australia. We have not seen anything like this," said Ms Berejiklian.

Victoria has traced many recent infections to quarantine hotels where security guards reportedly broke the rules by interacting with guests and each other.

In early June, when no cases were reported on two days, state officials had hoped they were nearing having the virus contained.

But Victoria recorded 127 new infections on Monday - its highest daily increase since the pandemic began.

What does the border closure mean?

Mr Andrews said those who had "unavoidable travel" could apply for permits to cross the border, including for work.

NSW authorities will be in charge of guarding border crossings, and flights will be cancelled.

Mr Andrews acknowledged the decision would be difficult for many people but said it was necessary given "the significant challenges we face in containing this virus".