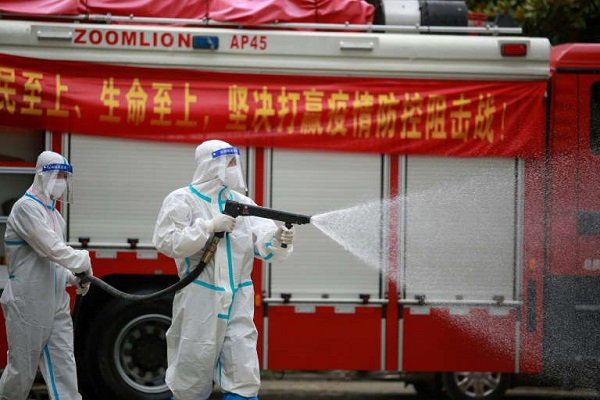 A firefighter wearing protective gear against the spread of Covid-19 coronavirus sprays disinfectant in a residental area in Yangzhou, in China's eastern Jiangsu province
30.5k Shares

China on Friday rejected the World Health Organization's calls for a renewed probe into the origins of Covid-19, saying it supported "scientific" over "political" efforts to find out how the virus started.

Pressure is once more mounting on Beijing to consider a fresh probe into the orgins of a pandemic which has killed more than four million people and paralysed economies worldwide since it first emerged in the central Chinese city of Wuhan.

A delayed and heavily politicised vist by a WHO team of international experts went to Wuhan in January 2021 to produce a first phase report, which was written in conjunction with their Chinese counterparts. It failed to conclude how the virus began.

On Thursday the WHO urged China to share raw data from the earliest Covid-19 cases to revive its probe into the origins of the disease.

China hit back, repeating its position that the initial investigation was enough and that calls for further data were motivated by politics instead of scientific inquiry.

That report said the virus jumping from bats to humans via an intermediate animal was the most probable scenario, while a leak from Wuhan's virology labs was "extremely unlikely".

"The conclusions and recommendations of WHO and China joint report were recognised by the international community and the scientific community," he said.

"Future global traceability work should and can only be further carried out on the basis of this report, rather than starting a new one."

In the face of China's reluctance to open up to outside investigators, experts are increasingly open to considering the theory that the virus might have leaked out of a lab, once dismissed as a conspiracy propagated by the US far-right.

Even WHO chief Tedros Adhanom Ghebreyesus has said that the initial probe into Wuhan's virology labs had not gone far enough, while President Joe Biden in May ordered a separate investigation into the virus origins from the US intelligence community.

A WHO call last month for the investigation's second stage to include audits of the Wuhan labs infuriated Beijing, with vice health minister Zeng Yixin saying the plan showed "disrespect for common sense and arrogance towards science".

Meanwhile, Danish scientist Peter Ben Embarek, who led the international mission to Wuhan, said a lab employee infected while taking samples in the field falls under one of the likely hypotheses as to how the virus passed from bats to humans.

He told the Danish public channel TV2 that the suspect bats were not from the Wuhan region and the only people likely to have approached them were workers from the Wuhan labs.

Ben Embarek previously acknowledged in an interview with Science magazine that "politics was always in the room with us" during the Wuhan trip, which was mired in delays after China initially stalled approval for the international researchers' entry.