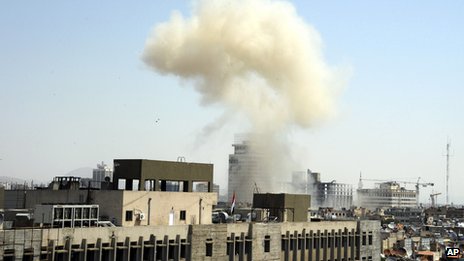 The UK-based Syrian Observatory for Human Rights (SOHR) said nine people were killed and dozens wounded in the blast in the district of Marjeh.

It is not clear what caused the blast. Gunfire was reportedly heard in the area immediately after the explosion.

On Monday, Prime Minister Wael al-Halqi survived a car bomb attack, which had targeted his convoy in the capital.

The latest explosion took place near a building of the interior ministry.

State television reportedly showed footage of widespread damage in the area, including blown-up cars and buildings with shattered windows.

"The toll in a car bomb near the old interior ministry building Marjeh district rose to nine and the number was expected to rise further because there are dozens of injured, some in critical condition," the SOHR said in a statement.

The observatory monitors human rights violations on both sides of the conflict via a network of contacts across Syria.

The group estimates that March was the bloodiest month yet, with more than 6,000 people killed - a third of them civilians.

More than 70,000 people have been killed since fighting between Syrian forces and rebels erupted in March 2011.